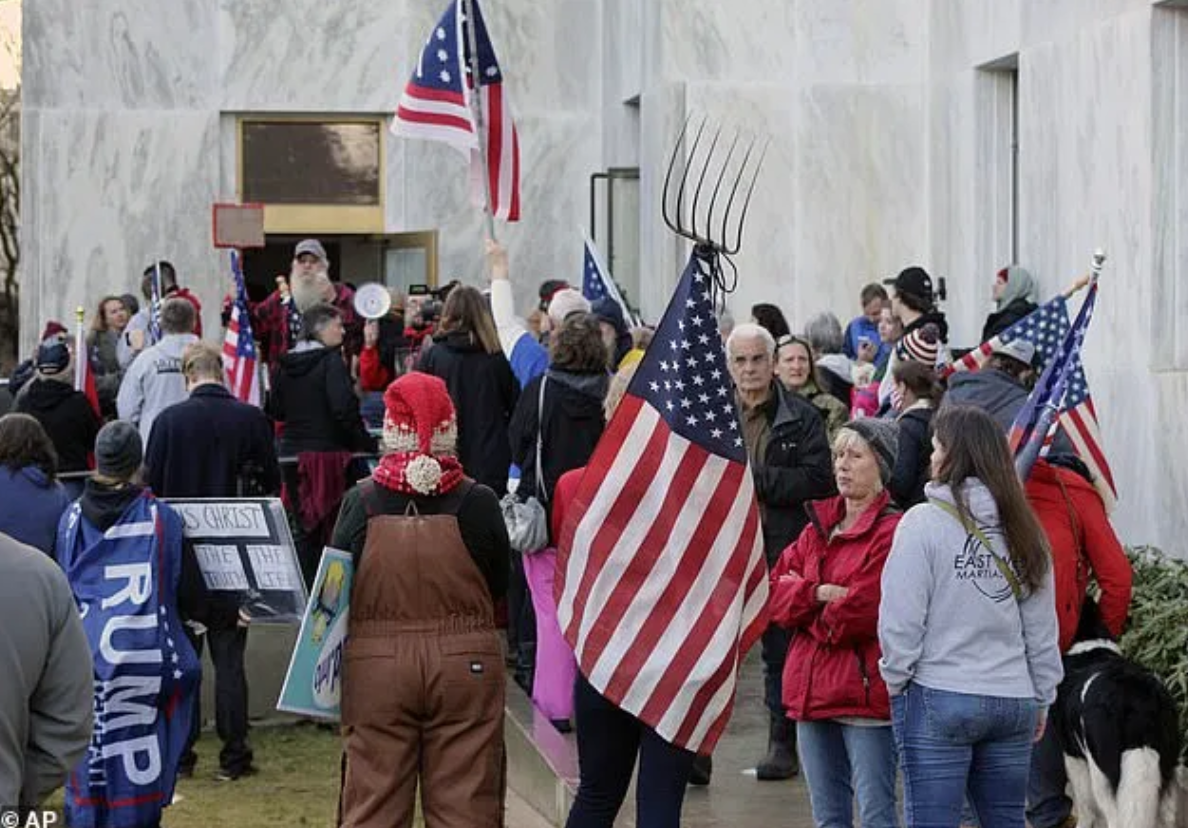 On Monday, a group of anti-lockdown protesters stormed the Oregon Capitol armed with rifles and pitchforks after the state legislature held a closed-door meeting to discuss new coronavirus restrictions for local businesses.

The group barged in during the opening day of the state’s third special session. According to reports, the group came together to protest over plans to close down certain businesses and pass a new set of coronavirus restrictions. The demonstrators initially gathered outside of the capital armed with their rifles, handguns, and even pitchforks. The group then tried to break into a locked door and attempted to tear down a vandalized statue. As the crowd entered the building, a man carried an American flag.

Around 9 a.m. this morning, protesters chant “Let us in” as they kick doors to the Capitol. pic.twitter.com/jlr9Pxs7LF

The Oregon Statesman-Journal noted that while legislative sessions are normally open to the public, the legislature decided to close down its doors to discuss coronavirus measures, including providing tenant assistance. During the session, Republican Oregon State Senator Dallas Heard expressed his opposition against the meeting, “This is yet another illegitimate session in which you, the democratic majority, have declared the people unfit to participate in person in their own Capitol building,” he said. In an act of defiance, Heard took off his mask and stood for 30 seconds of silence as a way to protest against the state’s coronavirus measures. The senator also accused Oregon Governor Kate Brown of carrying out a deliberate campaign “against the people” while describing its Democratic leaders as a “fascist government.”

So now Sen Dallas Heard, R-Roseburg, accuses Democrats of joining Gov Kate Brown in a “campaign against the people and the children of god.” He’s angry about a mask mandate and takes his off. Attempts to stand silent for 30 seconds. #orleg. pic.twitter.com/dHyI4YzZye

Later, Heard also went outside to address the demonstrators. Despite the heavy police presence, the pro-Trump protesters remained unfazed and even shouted that they are ready to be either maced or arrested. The authorities tried to push the crowd away from the building and had even used blue pepper spray. Salem Police Lt. Teven Upkes explained that during such encounters, protesters would also deploy pepper spray and that they had to use a different color to “separate” those used by the civilians and the police. The crowd then began chanting the phrase, “Arrest Kate Brown.”

Sen. Dallas Heard came out to speak. Said he’s with the “people.” Says he has issues with session. Calls for people to vote out Dems. People shout they don’t believe in the process. pic.twitter.com/v3Alzt8ZSj

According to the authorities, at least two protesters were arrested. While Democrats praised violent protests that were instigated by members of the far-left organization, Antifa, left-wing politicians criticized the anti-lockdown protesters, with House Speaker Tina Kotek describing the incident as “disconcerting and frightening.” The state’s longest-serving lawmaker, Democratic Sen. Peter Courtney, claimed that the protests ”shook him.”