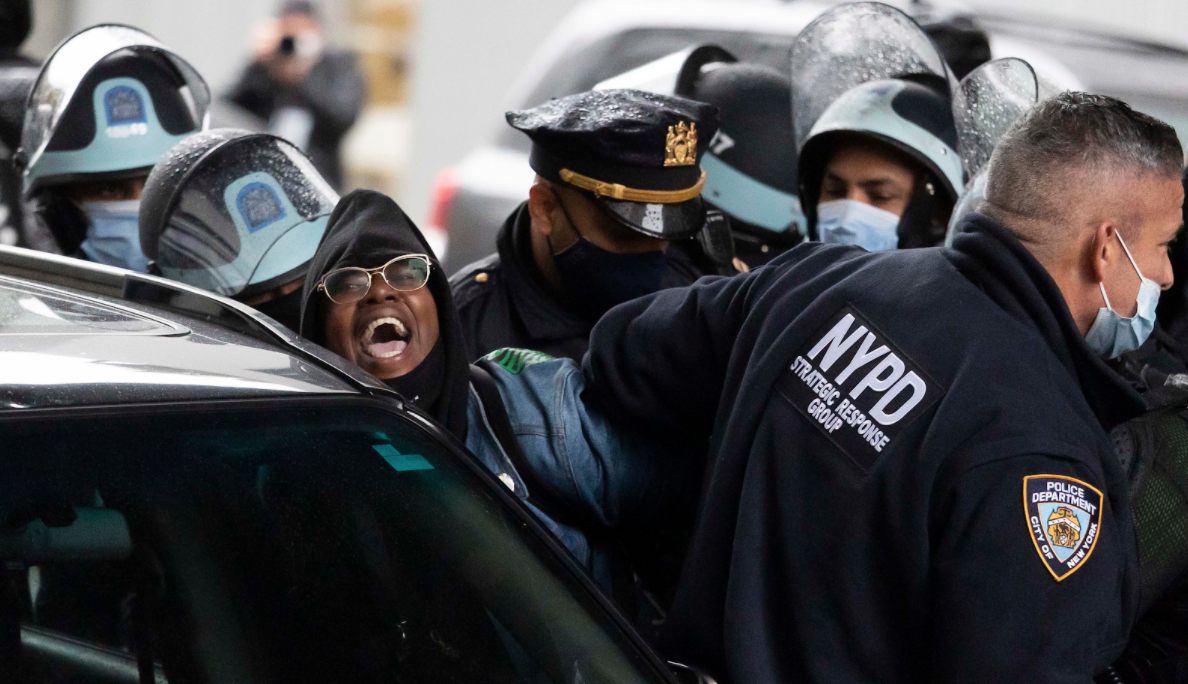 Just a few days before Election Day, Democratic supporters in New York came together to show their support for the left-wing agenda. Unfortunately, the protests became hostile after a woman screamed and berated law enforcement officers.

Over the weekend, left-wing supporters took to New York City streets to show their disdain against the administration. During their protests, police officers came and ordered the group to disperse. Initially, the officers tried to ask them to stay on the sidewalk since they were already blocking the traffic.

However, most of the protesters are members of the radical left-wing organization, Antifa and supporters of the Black lives Matter movement refused to back down.

In the midst of the exchange, one woman screamed at the authorities, “I hope all of your children get raped and killed!” The woman continued her angry tirade by saying that the authorities were “a f**king disgrace.” Other protesters followed her lead as several people from the crowd also yelled that all the good police officers were dead.

NYC: “An only good cop is a dead cop”

Antifa calling for the death of NYPD officers and their entire families pic.twitter.com/zpWZIXJ1Y0

A few moments later, the woman returned, this time, she was screaming at the event organizers, who were also Democratic supporters. The crazed protester went all out by saying that their march was not a success. She also complained that they failed to accomplish anything simply because they are afraid to get arrested.

The chaotic scene only showed the increasing division between Democratic supporters, some who wanted to hold peaceful protests and the radical left activists who continued to incite riots.

NYC: Antifa was extremely divided amongst itself today as some Antifa criticized other comrades for being afraid to be arrested for their cause

One shames the organizer for being a “white woman leading a black march” pic.twitter.com/tW0OygWhvI

Another woman from the crowd joined in. She also screamed at the officers, saying that they should not be in the protest. Rather, the woman claimed that the officers should be at the scene of a “real crime.” The woman also degraded the officers by calling them a “f**king pathetic pussies.””

As the tension continued, the law enforcement officers had to declare the protest as unlawful assembly. After protesters refused to follow police orders, a violent exchange took place, which eventually prompted the authorities to make the necessary arrests.

NYC: Antifa and BLM brawl against the NYPD after being warned to disperse from blocking the streets

Multiple arrests being made pic.twitter.com/7wZxdnRbGX

NYC: Many SJW’s triggered by the multiple arrests made for failing to disperse pic.twitter.com/N2xq4slneP

Over the weekend, several Democratic supporters across the country held various protests to condemn the Trump administration. In fact, demonstrators also marched in the suburbs of Portland, where violent riots had taken place in the last few months.

On Saturday, protesters stopped the traffic as they marched through the highway. During the march, one of the leaders called out white people to go in front to act as human shields. The idea stemmed from the racist belief that law enforcement officers would be less hostile if the protesters were white.

Antifa and BLM are marching through Vancouver, WA pic.twitter.com/YCtExiGWGZ

One of the demonstrators also donned a clown costume while carrying an Antifa flag.

BLM-antifa shut down the road in Vancouver, Wash. A person wearing a clown mask waves an antifa flag. pic.twitter.com/MLwO7qDQtF

Then, a group of Patriots led a counter-protest. The group confronted protesters from Antifa, and a scuffle ensued. At that time, the protesters also accused the Patriots of holding out a gun.

The Patriot group is tailing BLM & Antifa as they try to get on the freeway. #Vancouver pic.twitter.com/GZSKvgqcvI

In a report from The Patriot Hill, the media outlet cited that experts believed radical left-wing groups would hold post-election violence following the recent riots and political unrest across American cities. According to J. Michael Waller, the vice president for government relations at the Center for Security Policy and a conflict expert- he warned federal officials to be on the lookout on the possibility that mobs of left-wing supporters might storm the White House. “We have to prepare for these mobs by the tens of thousands if not more right in downtown Washington, DC … and storm the White House,” Waller said.