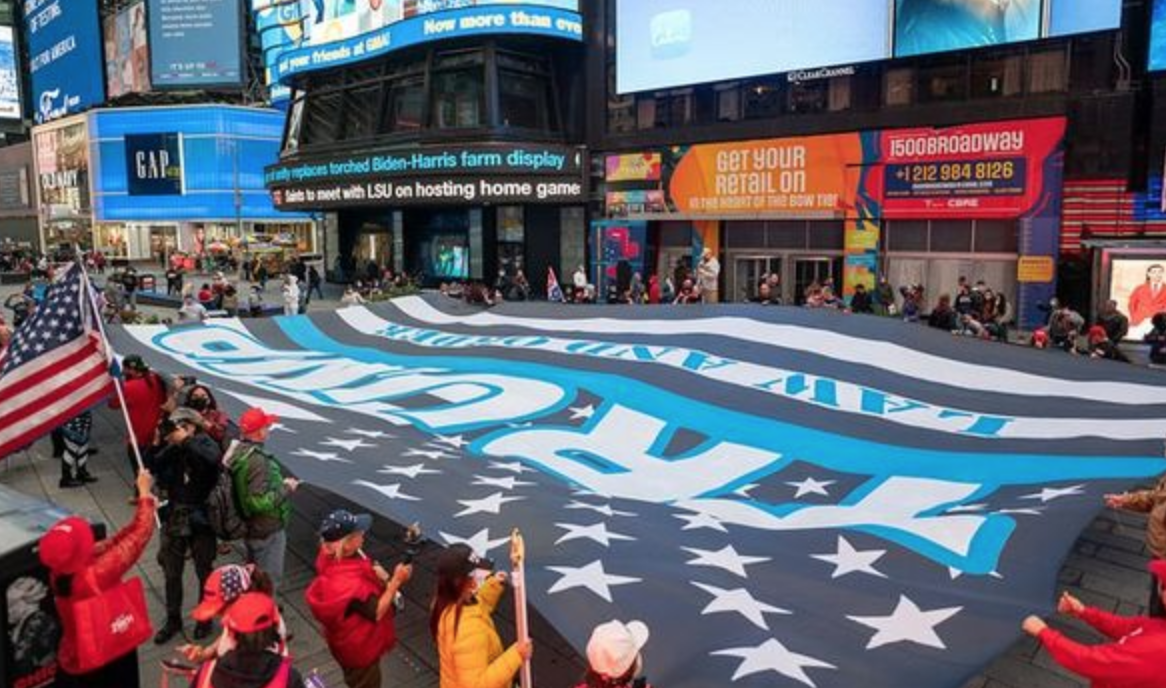 The flag, which measures a whopping 75-foot by 50-foot, celebrates Trump’s mandate to provide “law and order.” The flag also carries Trump’s iconic phrase of “law and order,” a statement he had made during the height of the violent riots that had swept across America. The flag was even big enough to cover the controversial BLM mural that was painted on the street.

The said mural was painted back in July, as dozens of BLM activists took over the streets of NYC. The mural gained notoriety after Democrat and NYC Mayor Bill de Blasio grabbed a roller and joined the protesters to paint it. In a statement, De Blasio said that they wanted to drive home their message by painting the BLM sign outside of Trump’s residence. “Let’s show Donald Trump what he does not understand,” de Blasio said.

The flag was a project organized through a Facebook page called “Operation Flag Drop.” The group already had a huge 140,000 followers and their goal is to spread Trump photos online. During the event, MAGA supporters marched around Fifth Avenue to the New York City Times Square while chanting the phrase, “Four more years,” and “Whose streets, our streets.”

Fortunately, the group’s effort did not go unnoticed. In fact, the President’s son, Eric Trump thanked the group in a Twitter post. “We love all of you so much! If I was there today (I’m campaigning in Michigan and Minnesota), I would come down and give you all a big hug!” Trump wrote. He also added the words “#FourMoreYears.”

We love all of you so much! If I was there today (I’m campaigning in Michigan and Minnesota) I would come down and give you all a big hug! Thank you for the support of @realDonaldTrump

The same phrase was used by MAGA supporters while they crashed Biden’s campaign event on Monday in Toledo, Ohio. The event was captured on camera showing a frustrated Biden speaking, as a group of Trump supporters was a block away, chanting and honking their horns. The supporters also gathered on the sidewalk as Biden’s motorcade passed by. During the said event, the nominee only managed to draw in a small crowd.

.@JoeBiden attacks Pres. Trump on panicking in response to the coronavirus pandemic and now with his own positive diagnosis.

“His reckless personal conduct since his diagnosis has been unconscionable,” he said.

Biden will deliver remarks on the importance of his “Build Back Better” plan to revitalize the American auto industry. pic.twitter.com/jXCsl1jv3x

Earlier this month, Trump supporters also gathered outside Walter Reed Military Hospital to show their support for the President. The supporters held a “get-well” vigil as Trump continued to recover from his COVID-19 diagnosis. The group was not let down, as the President surprised his supporters with a slow drive-by.