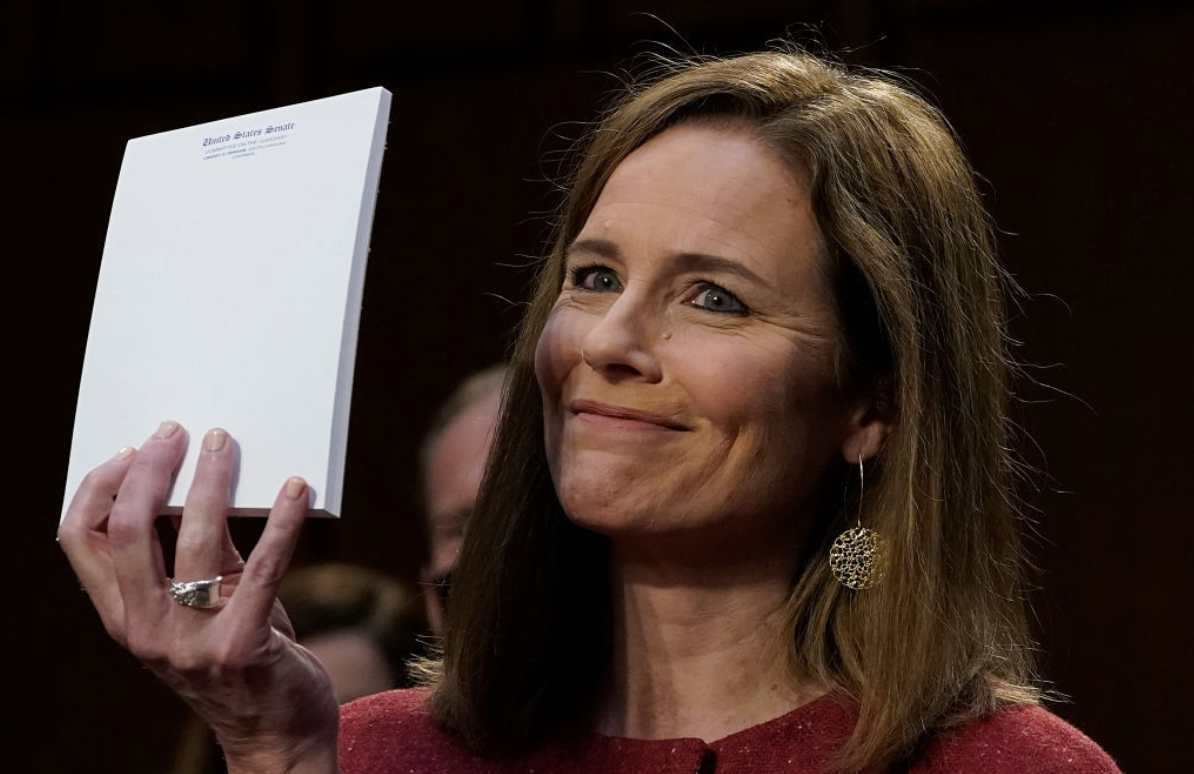 On Tuesday, Judge Amy Coney Barrett proudly held a blank notepad before the Senate Judiciary Committee, after she was asked what she was referring to during the hearing.

Spectators were impressed that the Judge did not make any single note during the entire grilling session. Instead, Barrett only relied on memory to help her in the intense and lengthy senate questioning process for the second day of her Supreme Court confirmation.

The incident took place when Sen. John Cornyn asked Barrett how she had prepared for the committee hearing. “You know most of us have multiple notebooks and notes and books and things like that in front of us,” the Senator said. He continued, “Can you hold up what you’ve been referring to in answering our questions?” Corny then asked if there is anything written on her notepad.

The judge smiled and held up a blank notebook. She giggled and said that the only letters found on her pad were the letterhead, which reads “United States Senate.” Coryn responded that Barrett’s memory was “impressive.”

Senator Cornyn asks Amy Coney Barrett if she's been working from notes with her thoughtful and intelligent answers. Nope! pic.twitter.com/tKKoNzyYbI

Other social media users also applauded and expressed their respect for Barrett’s strong knowledge of the law.

When asked to hold up what she's been using to help answer questions, Judge Amy Coney Barrett holds up a blank notepad.

During the hearing, Senators also tried to push Barrett to comment on legal issues, specifically on her stand on the landmark abortion case of Roe vs. Wade. Barrett said that while she wanted to remain as straightforward as possible with her answers, she refused to address the matter, believing that it might affect pending cases. “I might tilt one way or another in a pending case,” the judge said.

However, Democrats continued to press in. Sen. Dianne Feinstein insisted Barrett share her opinion on Justice Scalia’s ruling for the case of Roe vs. Wade. Barrett went on to invoke the same response that Justice Elena Kagan’s said during her confirmation hearing. The Trump appointee further explained that by giving her approval, or disapproval on pending cases would be a violation of her oath as a sitting judge.

Feinstein, who had grown increasingly frustrated, pushed Barrett to respond by rephrasing his question—noting that he did not need a direct answer. Again, the Judge stood by her response, and continued to reason out that she might possibly affect pending cases.

Moreover, the judge was even referred to as a “female Scalia” during the hearing. When asked about her reaction, Barrett claimed that she and the justice shared the same philosophy. She also described the judge as a defender of both “originalism” and “textualism.” However, the President’s appointee reiterated that if her confirmation had been approved, the country would not get another Justice Scalia, and instead, have a Justice Barrett.