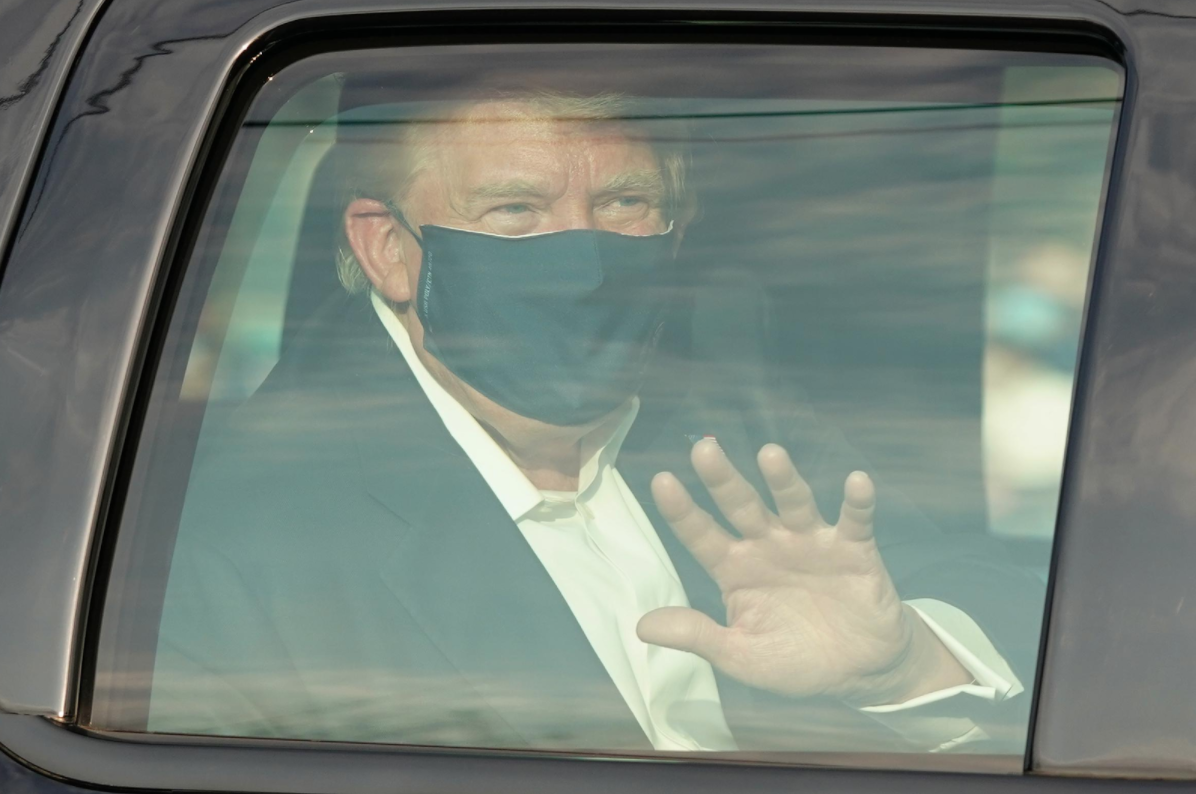 On Sunday, President Donald Trump surprised his supporters on his way to Walter Reed Hospital by taking a drive-by in an SUV, following the announcement that he and the First Lady Melana Trump, tested positive from the Covid-19 virus.

The President surprised everyone after he took a slow drive aboard a Secret Service SUV. During the drive, Trump waved at the crowd, and MAGA supporters cheerfully waved back. The surprise was part of the President’s way to thank his supporters for showing their solidarity after they flocked outside of the Walter Reed National Military Center in Bethesda, Maryland, to hold a “get well” vigil for the President.

Trump drives by the press and supporters outside Walter Reed hospital. pic.twitter.com/3phtKthqTH

Before the drive, the President dropped hints that he would give out a “surprise” visit for the “patriots”’ who stood by him during his stay at Walker Reed.

However, not everyone is happy with the president’s surprise visit. Journalists from the White House Correspondents’ Association complained that Trump’s trip was “outrageous” and complained that they were not informed about the President’s “surprise” drive. To retaliate, journalists threw criticisms against Trump, such as how he was not wearing the right kind of mask, despite being inside an enclosed vehicle.

Others also demanded that Trump should be kicked out of the White House for going on a drive. In a statement from White House Correspondents’ Association President Zeke Miller, a representative from the Associated Press, he criticized the President’s decision to hold a surprise appearance. Miller began by saying that it is completely “outrageous”’ how the President was released following his COVID-19 diagnosis. He also lambasted the lack of protective protocol for a president. In his letter, Miller also demanded that the American people should have access to unbiased, and reliable information about Trump’s health and well-being.

In addition, Washington Post blogger Jennifer Rubin also criticized the President’s decision. Rubin was so enraged that he tweeted about the President’s surprise drive more than 34 times. She also demanded that under the 25th amendment, Trump should be charged with “reckless endangerment” and “assault.” The left-wing journalist also claimed that Trump was a hypocrite for advocating for the pro-life movement when he is willing to kill his own supporters to win in the upcoming general elections.

I would hope that if any harm comes to those agents the attorney general of MD will indict Trump for reckless endangerment, assault (yes the virus he gives off count), etc.

next question to Pence: intentionally risking the lives of others for personal gratification sounds like the actions of someone not in his right mind. When do you go to the Cabinet to activate the 25th A?

On the contrary, White House physician Sean Conley, D.O assured the public that the president was well enough to be discharged from Walter reed. Conley wrote that based on close observation, Trump’s condition seemed to improve. Moreover, they have reviewed and debated their findings with current data and literature about the potential benefits and risks that every intervention will have.

Finally, Conley addressed rumors and concerns following Trump’s diagnosis. The White House physician claimed that on Thursday, the President only showed mild symptoms of the coronavirus. However, on Friday morning, the president was experiencing a high fever, noting that his oxygen level was also dipping. Thankfully, the White House physician confirmed that the president responded well to the treatment.