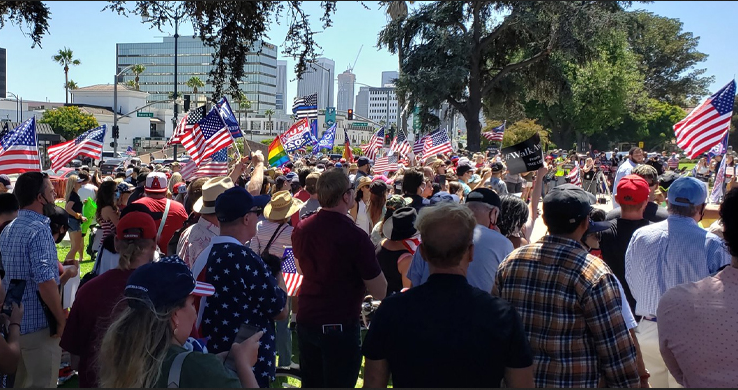 A rally supporting President Donald Trump was attacked and disrupted by a mob of unruly Antifa and BLM activists. This comes after the President has announced that he and the First Lady have tested positive for the coronavirus. Left-wing activists shouted their usual insults at the supporters of the President while holding up signs. Some of the signs read, “NAZI TRUMPS FUCK OFF!” and “DEPORT NAZI SCUM.”

A participant of the rally said that everyone was having a good time and that they called a prayer for the President when the Antifa and BLM activists came and disrupted them. “Everyone was dancing, having a nice time. They just started a prayer for the president. BLM and Antifa showed up. The police had to set up a barricade in the middle between them and the Trump supporters. BLM tried to start a fire in a trash can. Antifa was going up to people and taking pictures and videos of Trump supporters, getting right in their faces,” said one of the rally attendees who was interviewed by Breitbart News.

The Antifa and Black Lives Matter activists were looking for trouble as they tried to provoke the rally attendees who came there peacefully. Tensions started to rise as the rioters tried to cause trouble. The police came and tried to separate the two groups.

The supporters of the President displayed American flags, Thin Blue Line flags, and Gadsden flags while chanting “U-S-A!!” All of the Trump supporters are patriots who are there to show their support for the President and love for the country. The Antifa and BLM rioters on the other hand all carried signs with anti-American messages. There was one arrest made during the confrontation and it was a Trump supporter who deployed pepper spray to defend against the attacks of Antifa thugs.

As usual, the authorities were going after the law-abiding Trump supporters while letting leftist rioters run free and do whatever they want. This is only emboldening the rioters and the looters on the left to do more mayhem.