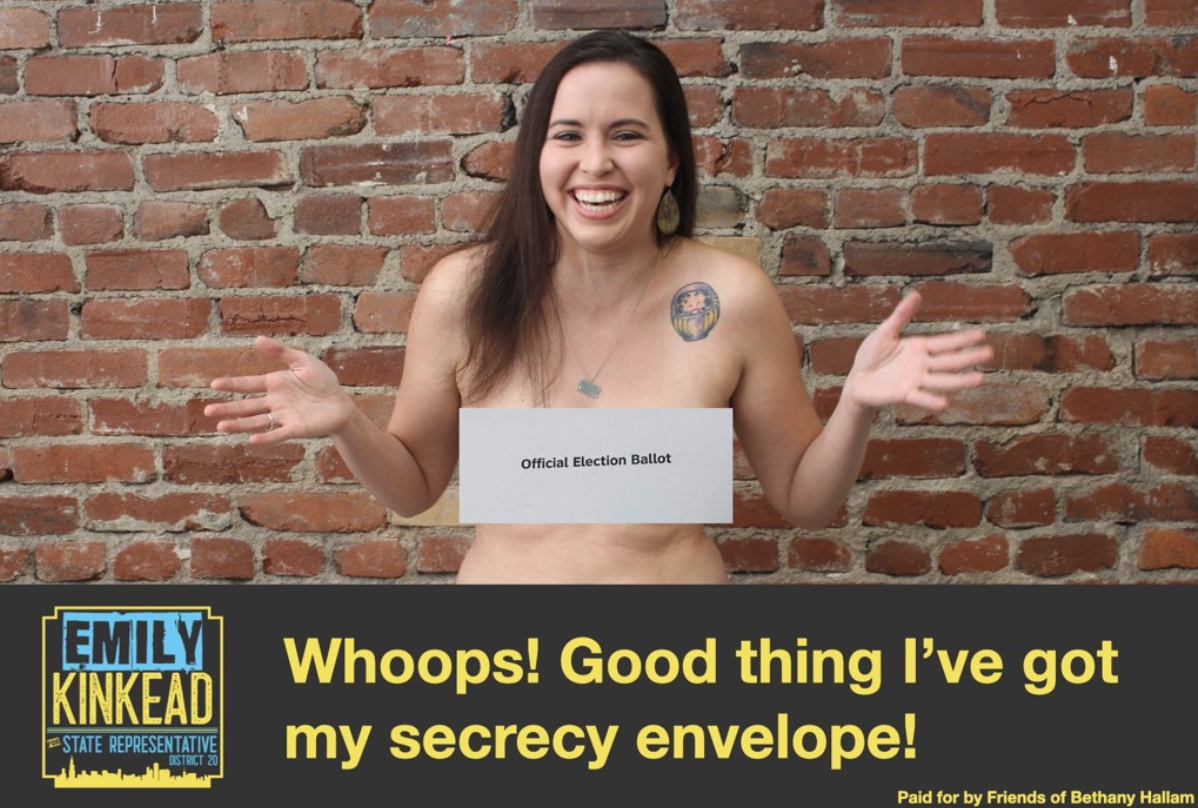 In a social media campaign, Allegheny County Councilwoman Bethany Hallam went topless. The lawmakers launched a social media campaign to remind voters not to submit “naked” mail-in ballots or those that do not have a secrecy envelope. In her post, Hallam wrote, “So your favorite elected officials got naked so that you remember to make sure that your mail-in ballot is NOT submitted without its secrecy envelope!! #nonakedballots #dressyourballot.”

Desperate times call for desperate measures! So your favorite elected officials got naked so that you remember to make sure that your mail-in ballot is NOT submitted without its secrecy envelope!! #nonakedballots #dressyourballot pic.twitter.com/bQXaQRHj0j

Hallam posed with other lawmakers, including Pennsylvania State Representative-elect Emily Kinkead and Allegheny County Councilwoman Olivia Bennett. Before becoming a legislator, Hallam had opened about her history with opioid addiction and numerous run-ins with the law.

Kinkead also made a separate social media post. The lawmaker wrote that no politician or ballot should go naked. Just like Hallam, she also urged voters to ensure that their votes are sealed with a secrecy ballot.

To ensure the integrity of the upcoming presidential elections, the Supreme Court ordered that mail-in ballots, which only had one envelope, would not be counted. The higher court ordered a two-step approach in submitting the mail-in ballots. According to the guidelines, the ballots should have an outer envelope with a signature to verify the validity of the voter, and the inner layer, which should be sealed properly with a secrecy envelope.

Since Pennsylvania is considered a swing state, Democrats are fighting hard to make each vote count, especially since Trump won in the state during the 2016 election. Moreover, politicians expected to have a cut-throat competition as both candidates are predicted to fight with narrow margins. Other Democrats had also sought to reverse the higher court’s ruling, including Philadelphia City Commissioner Lisa Deeley.

The City Commissioner argued that the two-step approach could potentially set-up the state in a post-election legal controversy. She explained that based on the number of ballots which were sent by mail in 2019, the state might possibly see 11,211 rejected. Add into that are other factors such as signatures, delivery, or those that arrive late; Deeley predicted that it might blow up to 20,000 uncounted ballots. This is important since the city commissioner listed that only 44,000 votes were considered in the 2016 Presidential elections.