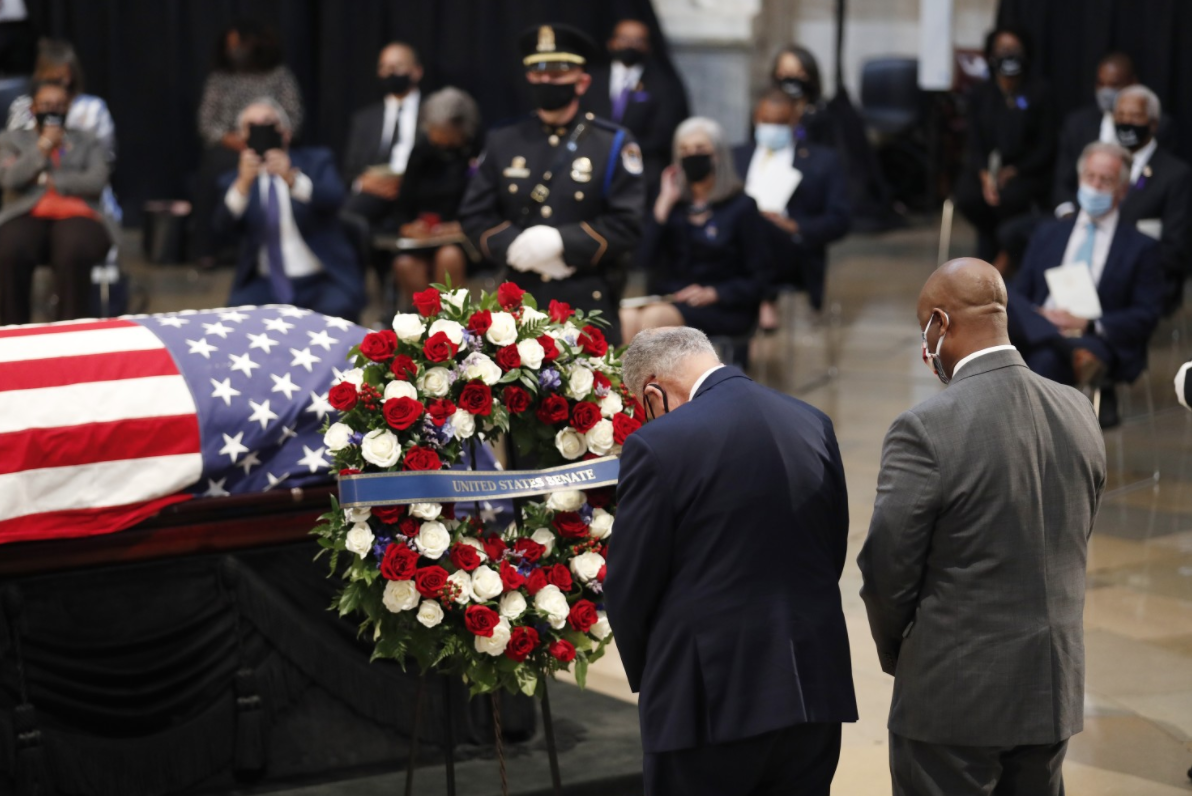 On Monday, President Donald Trump confirmed that he would not pay his respects to late Rep. John Lewis at the Capitol Hill rotunda.

When asked by reporters, the President responded, “I won’t be going. No.”

According to the Associated Press, Lewis’s body will be laid on Monday and Tuesday. Following strict social distancing guidelines, a public viewing will take place at the Capitol Hill building in order to prevent the spread of coronavirus.

Some of the politicians who have attended the ceremony are Vice President Mike Pence and Second Lady Karen Pence. Even former Vice President and presumptive Democratic nominee, Joe Biden and his wife, Dr. Jill Biden, is also expected to arrive on Monday. On the other hand, former President Barack Obama and his wife, Michelle Obama, is yet to confirm whether they would attend the public viewing.

Both Republican and Democratic lawmakers have also attended the ceremony, including House Speaker Nancy Pelosi and Senate Majority Leader Mitch McConnell. Lewis, who is known for his civil rights heroism, is the first African-American lawmaker who was laid in the Rotunda and the second one, which was laid in the state.

In his column for Breitbart News, writer Joel B. Pollack agreed that the President chose to remember the late lawmaker by being at the forefront of the civil rights movement and not for his partisan politics. Pollak wrote that late in his career, Lewis had used his civil rights track record to smear false accusations against his political opponents.

For example, in 2008, Lewis accused Republican presidential nominee Sen. John McCain as well as his running mate, Gov. Sarah Palin, as having ties with white supremacists who were behind the 1963 Alabama Church attack, which killed four little girls. Up to this day, the former presidential nominee never forgave him.

During his speech, the Senate Majority leader quoted Dr. Martin Luther King Jr. “The arc of the moral universe is long, but it bends toward justice.” He continued, “But that is never automatic. History only bent toward what’s right because people like John paid the price.”

In a seemingly rare show of solidarity, Pelosi also praised the late congressman as she called him the “Conscience of Congress.” During the ceremony, they also played Lewis’ old commencement speech. In the audio, the former lawmaker recalled how he would visit several towns, including Troy, Montgomery, Tuskegee, and Birmingham, where several signs are placed to segregation signs for white and colored men. Lewis recounted how he would often ask his parents what the signs are for. The only advice that they had given him was to ensure that he would stay out of trouble. However, Lewis claimed that meeting civil rights activists such as Dr. Martin Luther King Jr. and Rosa Parks changed his life. “You must find a way to get in the way. You must find a way to get in trouble, good trouble, necessary trouble.”