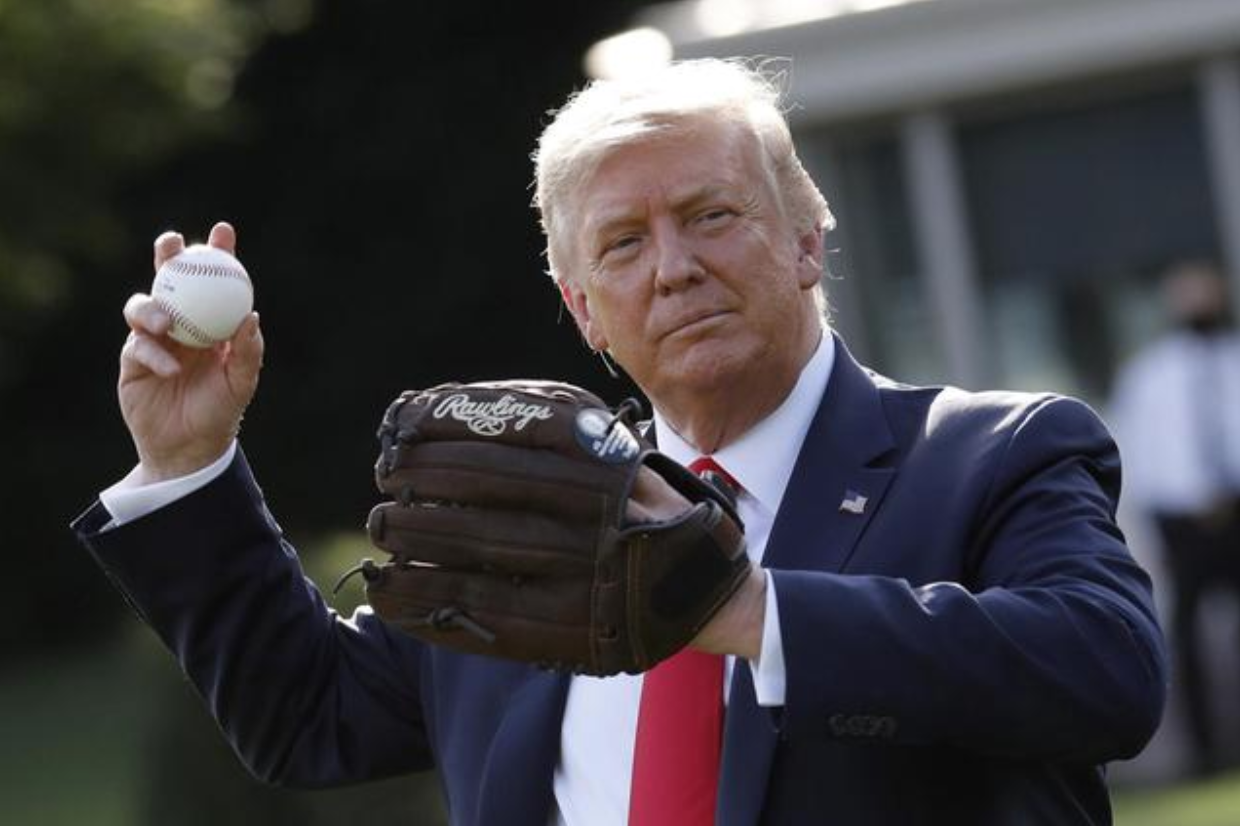 As the 2020 Major League Baseball season reopens more than three months late due to the Chinese coronavirus pandemic, President Donald Trump, together with New York Yankees legendary pitcher Mariano Rivera, celebrated the opening by playing catch with a group of Little League baseball players on the White House lawn.

The president’s celebration of the 2020 MLB reopening comes three weeks before his scheduled first pitch throw at a New York Yankees home game on August 15. The game is between the Yankees and its arch-rival Boston Red Sox. This will not be Trump’s first time to throw the first pitch at a baseball game.

Prior to becoming president of the United States, back in September 2004, Donald Trump as a private citizen, threw out the first pitch for a game hosted by the Somerset Patriots, a team in New Jersey that plays in the Atlantic League of Professional Baseball. According to Lancaster Online, Trump landed on the center-field aboard a private helicopter and then threw an impressive pitch.

Benny Johnson suggested that the president come in a helicopter again when he throws the first pitch for the Yankees game.

Who else thinks President Trump should do this again when he throws out the first pitch at Yankee Stadium? pic.twitter.com/WpARLrcN5P

Of course, the left did not let this opportunity pass and collectively bashed Mariano Rivera. Prior to the baseball visit, Rivera appeared at one of the president’s White House press briefing on the coronavirus. Netizens had a field day cracking jokes and insulting both Rivera and Trump.

One claimed that the president’s ego wouldn’t let him put actual health experts at his briefings, the said, “This is the weirdest president & administration in American history.”

Trump's ego won't let him put actual health experts during a pandemic at his briefings, but he will promote former baseball players, like Mariano Rivera, who support him & say nice things.

This is the weirdest president & administration in American history.

Another questioned Rivera’s appearance in the briefing and called him out for not wearing a mask.

Why the fuck is Mariano Rivera there, @Yankees? And he’s not wearing a mask either. I don’t know how much longer I can take this before I start screaming and scaring my neighbors #TrumpPresser

Comedian Wanda Sykes also had something to say, and sarcastically called Rivera a “great epidemiologist.”

Nice to see Trump finally taking on the Covid 19 pandemic. At his briefing, he brought in the great epidemiologist Mariano Rivera.

Another took Rivera off his top 5 favorite athletes, saying it was “Incredibly sad for a self-made immigrant to inexplicably align himself with Trump.”

Mariano Rivera *was* one of my top-5 favorite athletes of all time. Having met him, he’s warm, decent, and kind. Incredibly sad for a self-made immigrant to inexplicably align himself with Trump.

Director of the National Institute of Allergy and Infectious Diseases Dr. Anthony Fauci also threw the first pitch at the first Washington Nationals game of the season. However, unlike Trump’s impressive and accurate pitch, Fauci completely missed the mark. His pitch was so bad that people on social media compared it to his predictions on the coronavirus. Conservative activist Benny Johnson quipped, “Fauci’s first pitch was about as accurate and disciplined as his preparations and predictions for the China virus.”

Despite criticisms, Rivera continues to stand by with the president. In an appearance on Fox and Friends last year, he explained that he was friends with Trump even before he became president, saying, “So, because he’s president will I turn my back on him? No, I respect him. I respect what he does and I believe he’s doing the best for the United States of America.”