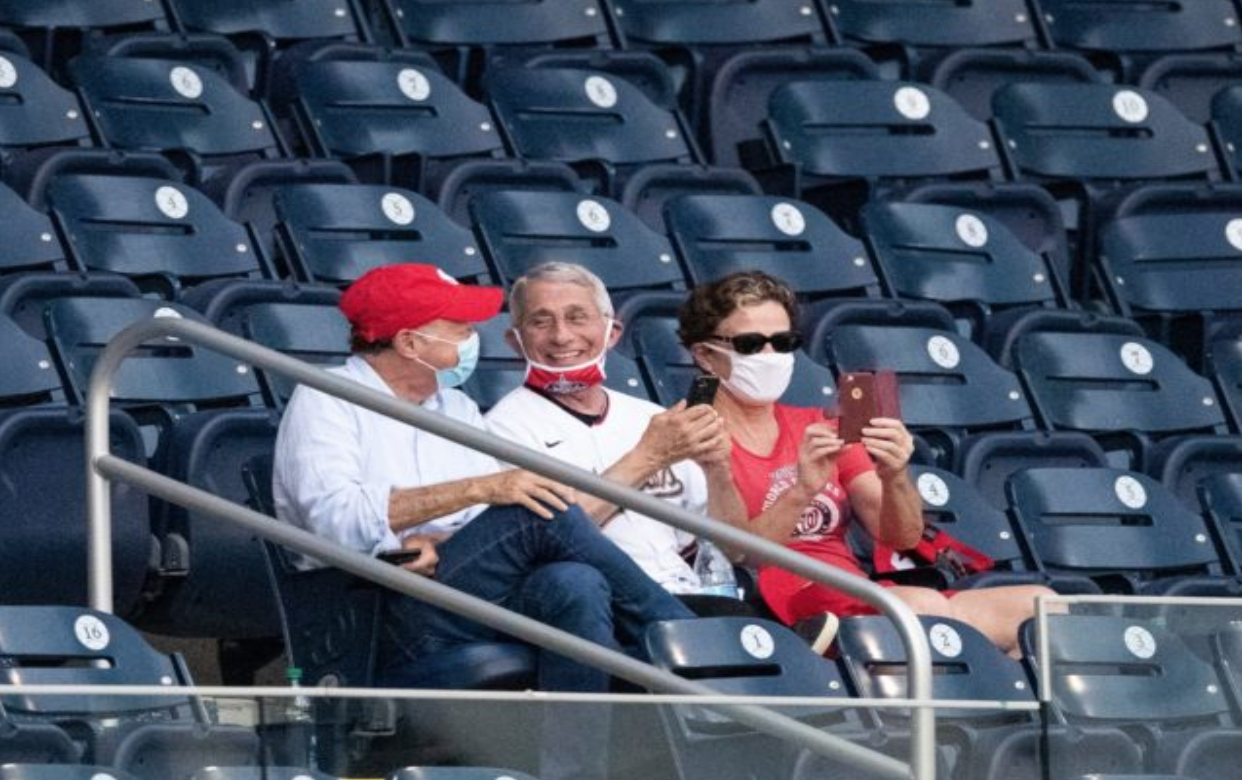 Dr. Anthony Fauci just gave his critics more reason to question his decisions. He watched a baseball game in person on Thursday while he took off his mask. Fauci made a public appearance during the game between the Washington Nationals and the New York Yankees where he was invited to make the first pitch. When he threw the first pitch, he was wearing a mask with the team’s logo. He was invited by the baseball team in recognition of what he has done to fight the pandemic.

After his appearance, the doctor watched the game from the stands and that was when he was pictured without his mask off. He was also together with two others in the stands and they were sitting right next to each other although they were the only ones there. They did not bother to do social distancing.

New York Times reporter Alex Berenson, who has often criticized the doctor for his seeming alarmism regarding the virus shared what he thought of the doctor. “And there’s Dr. Anthony Fauci showing us all he knows exactly how well masks work! Thanks for the lesson, doc,” Alex Berenson wrote on Twitter. The photo was not manipulated or changed as it was taken by an Associated Press photographer. Other critics of the doctor also started to share the images.

And there’s Dr. Anthony Fauci showing us all he knows exactly how well masks work! Thanks for the lesson, doc. pic.twitter.com/jdHPzq5HfB

On Wednesday, Washington, DC, Mayor Muriel Bowser enacted an order that would require residents of the city to wear face masks when going out or face a $1,000 fine. That order exempts government officials. That just shows the kind of entitlement that many government officials have, especially the Democrats.

What Fauci did during the baseball match takes away from his credibility. A lot of people are already criticizing his alarmist pronouncements regarding the coronavirus. His recommendation for people to use masks is being used by a lot of local officials to force their local population to follow their unlawful orders.

Seeing the doctor going around without a mask and not socially distancing will only anger people. It will also fuel the conspiracy theorists that are claiming that the coronavirus is a hoax and that the government is just pushing it for its own agenda. In other words, it will not help the government’s effort to stop the virus. In fact, it will only make it more difficult for those who are genuinely trying to prevent its spread among the population.