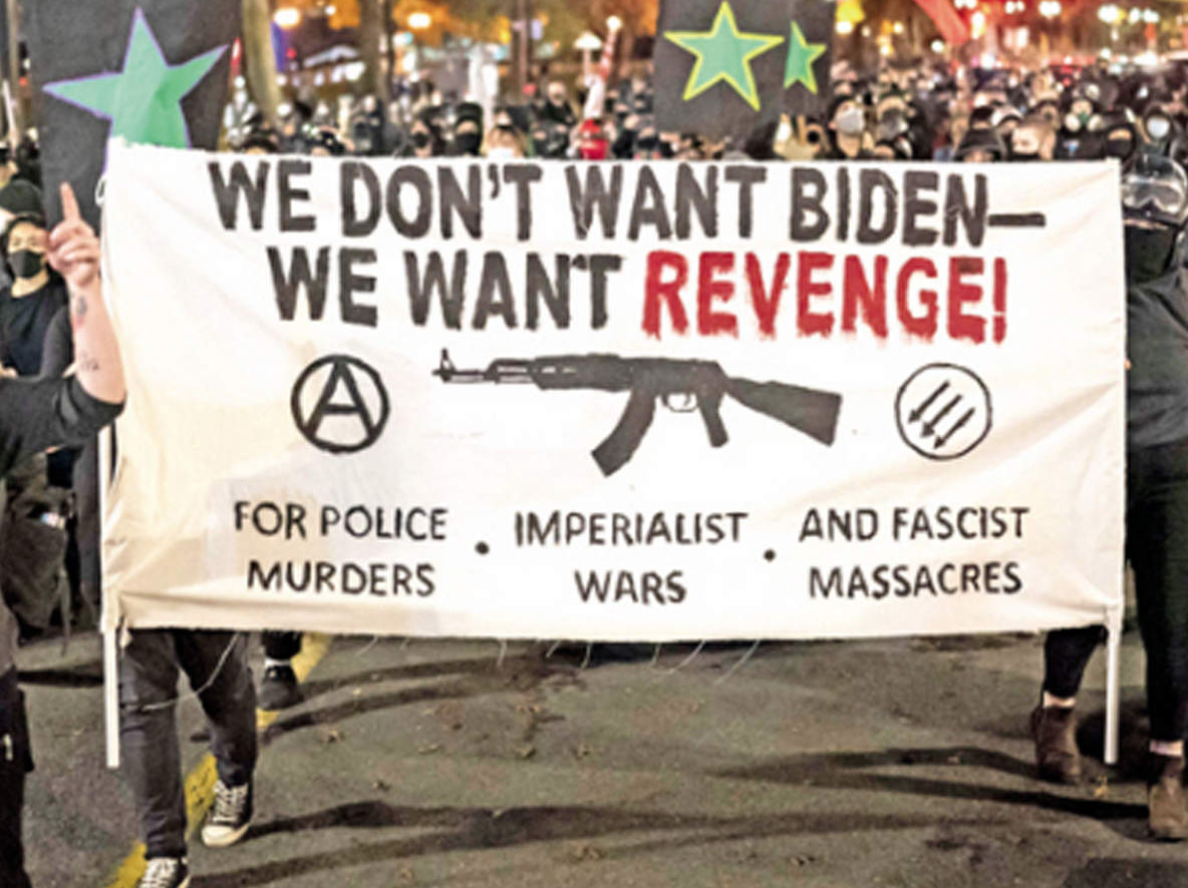 On Wednesday, the city of Portland, Oregon, has yet to witness another violent attack from members of the left-wing organization, Antifa, as the mob chanted, ”we don’t want Biden- we want revenge.”

Unfortunately, even President Joe Biden’s message of healing is not enough to end the ongoing political crisis in the United States. Instead, while Democrats celebrated the President’s Inauguration day, members of the radical left-wing organization Antifa took over Portland’s streets to show their discontent against the new administration. The group even destroyed and attacked the local Democratic Party headquarters.

In a social media post by New York Times contributor, Mike Baker, he noted that the group carried an anti-Biden message. One sign even reads, “We don’t want Biden—We want revenge!” Another sign reads, “F*ck Biden!” In his post, Baker noted that roughly around 200 protesters had gathered together to show their disdain against the new administration.

The Portland crowd has now gone to the local headquarters of the Democratic Party, smashing windows and writing "Fuck Biden" pic.twitter.com/N01iXhyWll

“We are ungovernable” - banner at Portland protest on Biden’s inauguration today pic.twitter.com/H1ZA8CBau1

According to Baker, the group wanted to seek revenge, not healing against police murders, fascist massacres, and “imperialistic wars.” The journalist also clarified that there were no Trump supporters who were present at the event. Baker noted that the crowd is made up of anti-anarchist, anti-fascist, youth liberation, and racial justice activists.

Seeing some criticism for calling the crowd "left wing," which was my shorthand to make clear that it isn't Trump supporters on the streets of Portland. The longer version is that the crowd is a mix of racial-justice, anti-fascist, anarchist, youth liberation, etc

The reports cite that the rioters fled the scene when the law enforcement authorities arrived. In fact, the group even pulled an officer from his bike, although the bike was eventually recovered. Overall, eight adults between 18 to 35 years old were arrested in connection to the incident.

To make matters worse, the crowd also destroyed a local ICE facility in their call to abolish the federal immigration office. According to the authorities, the rioters left massive property damage in the building as the protesters hurled rocks and eggs. The rioters also came prepared, equipped with shields, fireworks, and even stun guns.

In addition, a group of Black Lives Matter activists and Antifa rioters also blocked the traffic in downtown Seattle during Inauguration day. The group even lit a fire near the commuter buses, which resulted in heavy traffic.

American flags are burned on the streets of Seattle as part of tonight’s J20 Direct Action #Seattle #SeattleProtests #J20 pic.twitter.com/DTL9CzEHnF

During the protest, the group demanded Biden to abolish not just the police force but as well as the entire country’s prison system. The group then vandalized a nearby Amazon Go store, where they wrote a message, “Guillotine Bezos.”

Police are monitoring a group in #DowntownSeattle. Multiple sites have been vandalized. One arrest made for property damage. pic.twitter.com/oLfIsGt5Af

As Antifa continued to wreak havoc and chaos across American cities following the May riots, former U.S. President Donald Trump and the rest of MAGA supporters were repeatedly demonized and condemned by the mainstream media as well as several key GOP politicians as a result of the recent Capitol riots.

In fact, Democrats used the January 6 incident as a way to launch a second impeachment against Trump and bar him from holding any government office.