Pelosi Launches Another Impeachment Against Trump

On Sunday, Democrat and House Speaker Nancy Pelosi launched another impeachment complaint against President Donald Trump, just two weeks before the President is expected to step down from the White House.

In a letter to her colleagues, the House Speaker declared that Trump poses an “imminent threat” to the U.S. She argued that with increasing concerns for the country’s safety, and democracy, the House Speaker asked her fellow Democrats to activate the 25th Amendment.

Generally, the 25th Amendment allows the transfer of power from the President to the Vice President with the majority of votes from Congress. The House Speaker argued, “In protecting our Constitution and our Democracy, we will act with urgency because this President represents an imminent threat to both.”

Pelosi continued that House Democrats must act immediately since Trump can still potentially represent an “ongoing assault on our democracy.” She explained that in order to activate the 25th Amendment, Majority Leader Steny Hoyer would hear out a resolution filed by their fellow Democrat Rep. Jamie Raskin. If the House can receive a “Unanimous Consent,” it will immediately render Trump powerless. If the House Democrats fail, the subject will be brought to the floor, where Vice President Mike Pence will be given 24 hours to respond. 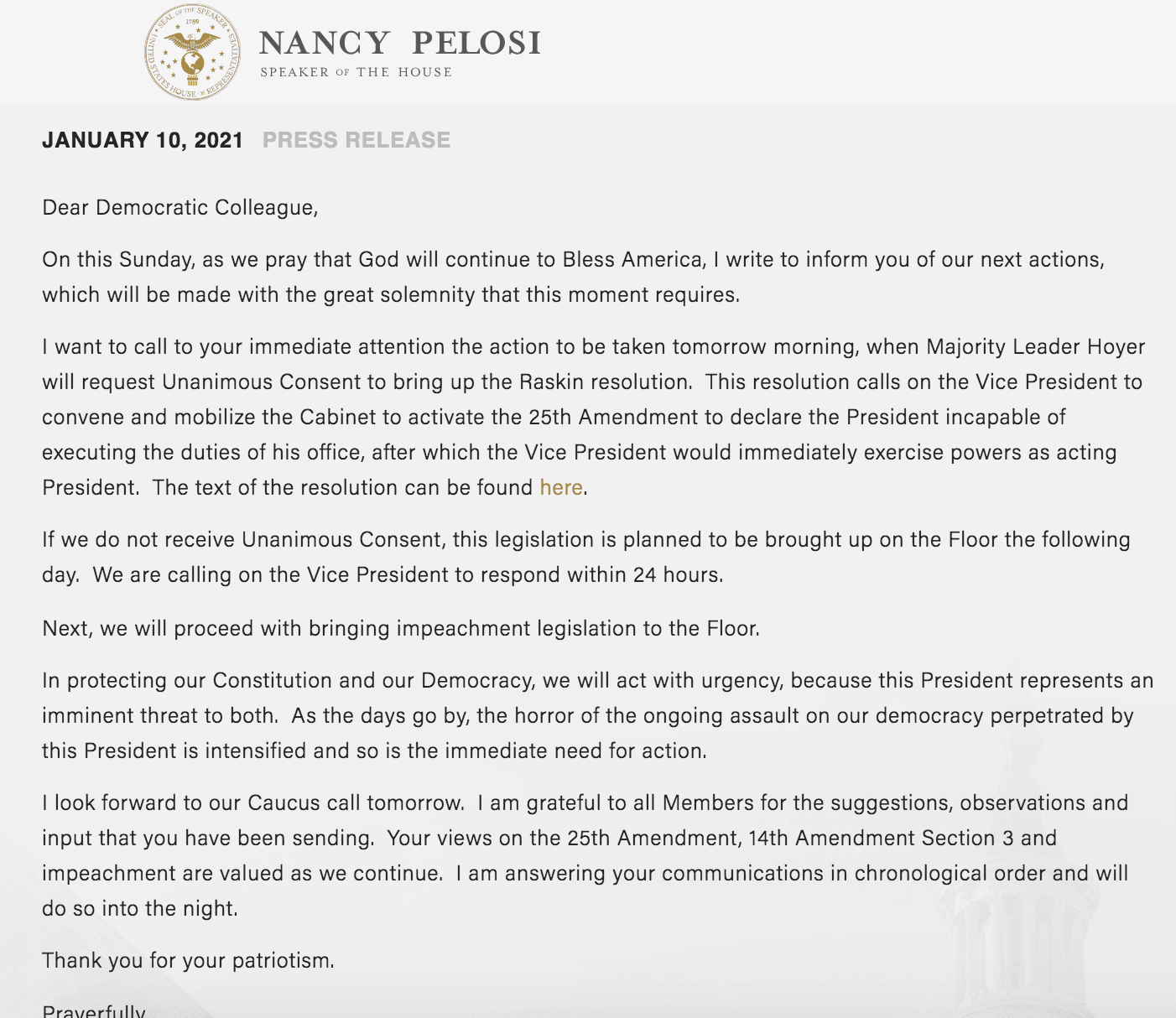 Democrats are expected to present the articles of impeachment by Monday, While the action would remove Trump from his presidential powers, it would also delay the impeachment trial in the Senate for 100 days. This would give time for President-elect, Joe Biden to focus on his agenda for his first few days in the White House.

In a memo, Senate Majority Leader Mitch McConnell announced that if the House can successfully push through with the articles of impeachment, the earliest date that the Senate could conduct an impeachment trial will be on January 19, just a day before Biden’s inauguration day. McConnel wrote that the President’s term will be over, even before the impeachment trial begins.

While Democrats plan to use the 25th Amendment to remove Trump, a report from The Patriot Hill claimed that Pence refuses to invoke the U.S. Constitution. According to the media outlet, the Vice President denied calls from Pelosi, and Schumer to discuss such options.

Other Republicans, such as Republican Sens. Pat Toomey and Lisa Murkowski demanded that the President should rather “resign” from his post. In fact, Toomey claimed that Trump had practically “disqualified” himself from the Presidency for inciting the violent riots that took place on Wednesday. On the other hand, Republican Sen. Roy Blunt urged the President to observe caution in the last few days of his administration.

While Democrats continued to accuse Trump of enabling violence and endangering the country’s democracy, the President had made it clear that he will ensure the “smooth transition”’ of power. The President also condemned the lawlessness and violence in Congress and demanded that the protesters be held liable.