Attacks at “Jews for Trump” Rally 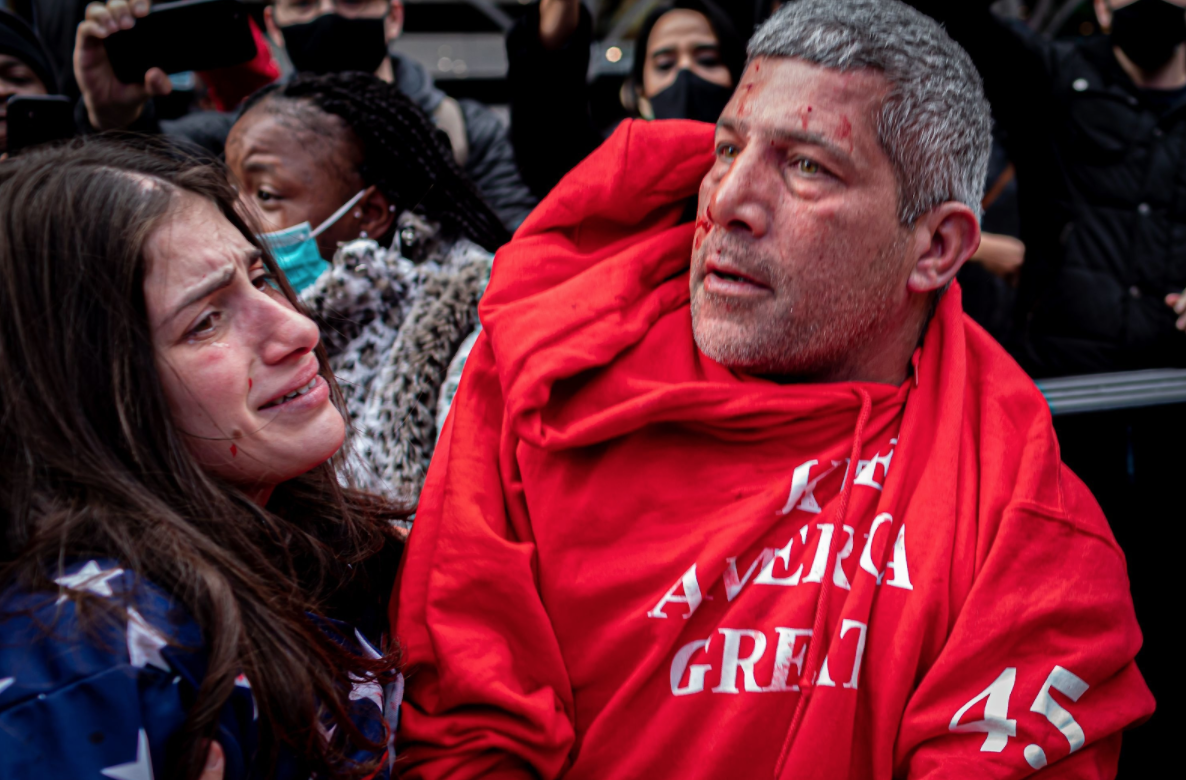 On Sunday, a “Jews for Trump” rally was met with violence as anti-semites and left-wing protesters attacked the caravan of MAGA supporters moving through New York City streets.

As thousands of Jewish Republican supporters came together to show their support for the President, a group of black-clad demonstrators was already waiting to attack the caravan. Some of the protesters even went as far as to terrorize an entire family, leaving their children traumatized.

In a Fox News report, the media outlet cited that a family of seven were attacked with pepper spray by an unknown assailant. According to one of the family members, they were driving at the 5th Ave with their car windows down to display their Trump flags. Suddenly, a man fired pepper spray inside the vehicle. “Immediately the kids started crying and screaming and I jumped out of the car after I was peppered [sic] sprayed as well,” the family member said. He quickly jumped out of the car and was chased down by the suspect. Fortunately, his mother flagged down a police officer, and the assailant was later arrested.

In a separate incident, a woman was also arrested for firing pepper spray.

Woman arrested for spraying pepper spray at the #JewsForTrump vehicle convoy on 5 Avenue in Manhattan. pic.twitter.com/kfrwaLTJgT

Moreover, several counter-demonstrators threw rocks and eggs at the caravan.

In another Twitter post, a man was also caught punching the vehicles as the caravan moved through the Brooklyn bridge.

This man is so upset that a #JewsForTrump vehicle convoy practically shut down the Brooklyn Bridge while heading to Manhattan, that he began punching vehicles. @NYPDnews @realDonaldTrump @TrumpWarRoom pic.twitter.com/6kSZKUoa0F

Other Democratic supporters ripped and destroyed Trump flags in Manhattan’s streets, which resulted in a violent brawl.

According to Breitbart News, more than a thousand MAGA supporters in New Jersey joined the caravan. Some of the supporters waved pro-Trump flags as their way to show their support for the President.

In addition, some of the participants came from as far as Monsey, New York, 60 miles away from Manhattan. Others also traveled from Flatbush and Boro Park. The caravan started at the AMC movie theater before making its way from the Clarence Dillon Public Library in Bedminster, a short five-minute drive away from the President’s golf courses.

In addition, another 1,000 people lined up at Route 206 to support the parade. The “Jews for Trump” rally was one of the two parades which was held in New York over the weekend. Both of the said events were organized by trumptruckparade.com.

Mike Hydro, one of the Trump supporters who attended the rally, stated that the event simply demonstrates the power of the silent majority. He argued that the parade and not the polls are the true measure of the President’s support. “This is the people of New Jersey, and this is what they want,” Hydro said. He added, “All the things you read or see, it’s nonsense.”

RIGHT HERE in NYC!!! The silent majority is coming out strong! There are more Republicans in NYC than you think. NYC is turning RED and we are for TRUMP!!! 🇺🇸
pic.twitter.com/LLEW5JMipc