Crowd Booed As Trump and Melania Paid Their Respect to RBG 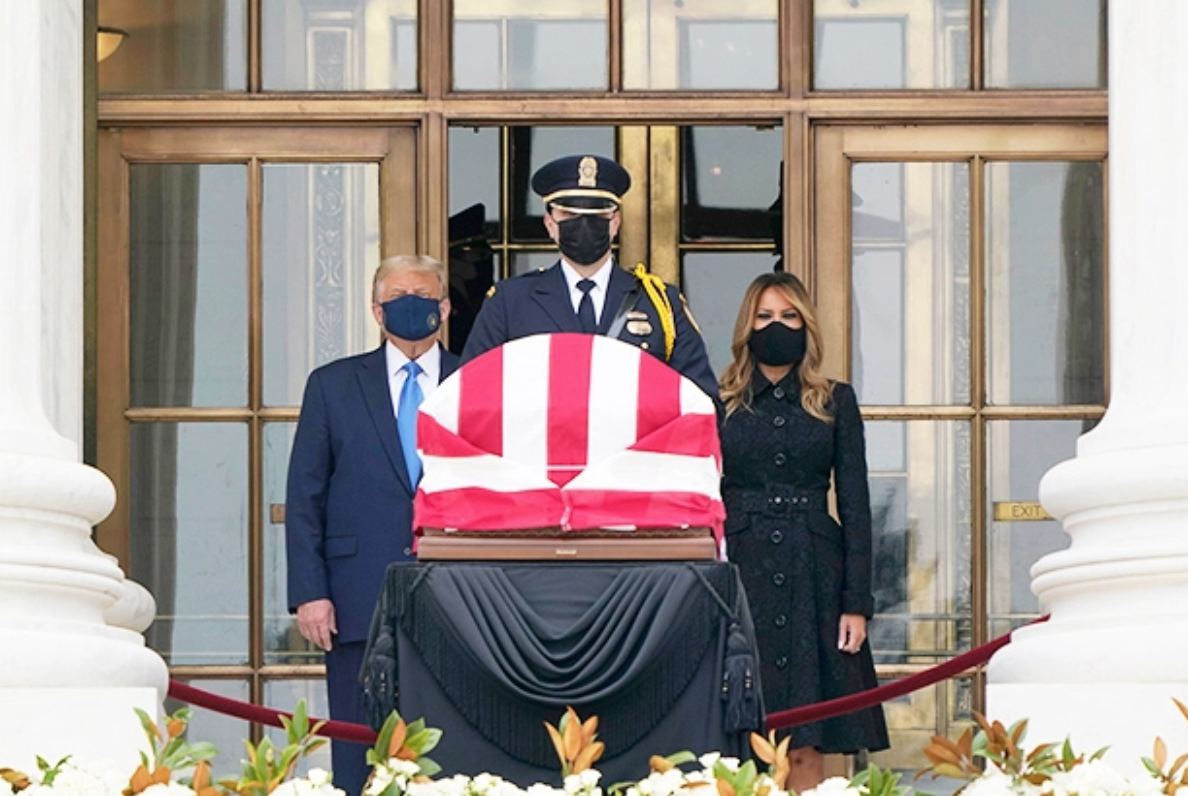 The crowd yelled, “Vote Him Out!” and others demanded to “honor her wish!” as Trump and Melania solemnly stood at the porch of the high court to pay their respect. They both wore dark masks, bowed their heads, and closed their eyes to show their solidarity with the late justice. The two quickly left and went back to the presidential motorcade as the chants grew louder.

JUST IN: Pres. Trump arrives at the Supreme Court to pay respects to judicial icon Ruth Bader Ginsburg, as onlookers shout "Vote him out!" https://t.co/24QeUyEDzK pic.twitter.com/DqJAKbqY5B

Chants of “Vote him out!” and “Honor her wish!” outside the Supreme Court as the president arrives pic.twitter.com/lys9EqBuNs

Following RBG’s death, Democrats accused the administration of failing to honor the justice as Republicans moved to provide a nomination. However, Democrat Senate Minority Leader Chuck Schumer quietly slipped a resolution to use RBG’s dying wish to their own advantage. Schumer passed an amendment that would prohibit the Senate from appointing a new justice and leave her seat vacant. Fortunately, Sen Ted Cruz immediately blocked the resolution.

Trump also announced that he would name the new Supreme Court Justice after RBG’s funeral services. In his statement, the President vowed that he would choose a woman to replace the new justice. “It will be a woman, a very talented, very brilliant woman,” the President said. He continued, “We have numerous women on the list. I built this incredible list of brilliant people.” The President also gave his praises for RBG and how she had served as an inspiration for Americans. He believed that the late justice serves as a “powerful reminder” that people can both disagree but still treat each other with the same “decency,” “dignity,” and “respect.”

The President also posted a video clip about his statement about possibly providing his nomination for the next Supreme Court Justice next week. According to reports, Trump plans to nominate a conservative, Judge Amy Coney Barrett.

When he was asked about the incident, Trump claimed that he only heard people chanting and made nothing out of it. “But we really could hardly hear too much. We heard—we heard a sound, but it wasn’t very strong,” the President clarified.

Moreover, Press Secretary Kayleigh McEnany expressed her disdain against the people who had jeered and mocked the President. In a White House Press briefing, McEnany claimed that their actions were extremely “appalling” and “disrespectful,”’ especially since the President came to pay his respects for the late justice. Other Democrats are also using their influence to block the nomination. Filmmakers such as Michael Moore and Rob Reiner urged Democratic politicians, such as House Speaker Nancy Pelosi, to deploy their power and block a Republican nomination.