Cher Warns that Trump’s Win Signals the “End of Democracy” 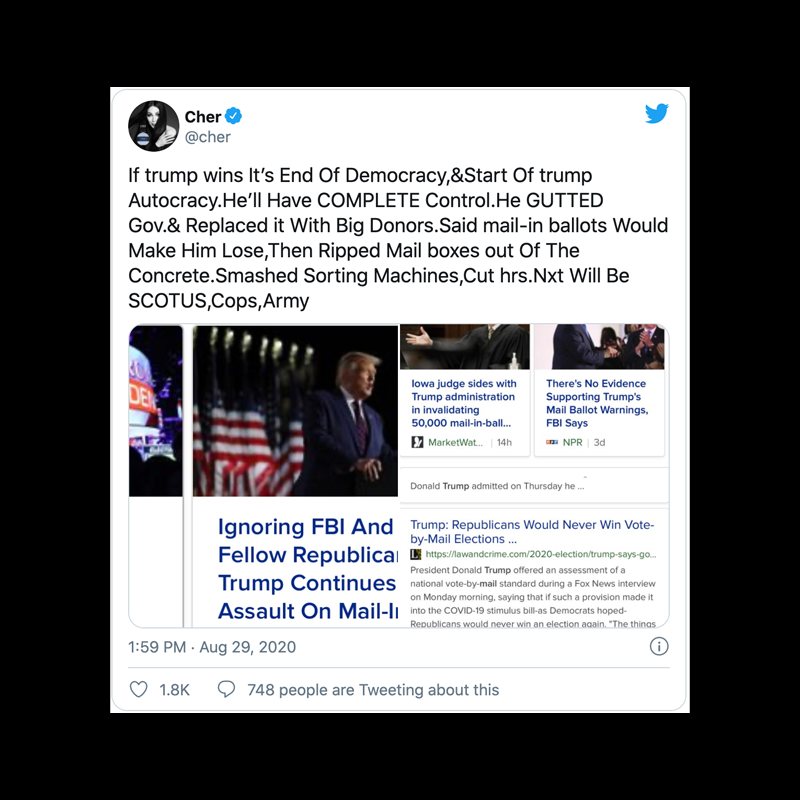 Vocal Trump critic and popstar Cher had yet again released another incomprehensible accusation against President Donald Trump, as she gives out a grave warning to Americans that the President’s win signals the end of Democracy.

Cher who had volunteered to become a postal worker to push for the left-wing agenda of a nationwide vote-by-mail system had once again released a social media post criticizing the administration, and giving out a warning to Americans that the country might be close to having a dictator like government in a series of tweets, which were released over the weekend. Without citing any proof on how the president is curtailing press freedom, Cher wrote, “If Trump wins Its End Of Democracy, &Start Of trump Autocracy. He’ll Have COMPLETE Control.”

Cher continued that Trump is “ripping”’ mailboxes out of sidewalks, as well as smashing sorting machines. Without any proof or evidence, the Hollywood star also believed that Trump will continue to “‘dismantle” federal departments such as the U.S. Supreme Court, U.S. Army, as well as law enforcement officers such as police forces. However, Cher’s wild claim came in contrast to the President’s support for the “Back the Blue”’ movement, as increasing anti-police sentiments were being asserted by radical left-wing activists.

Moreover, there is no truth behind Cher’s accusation that Trump is ripping mailboxes. In fact, the procedure on the removal and replacement of American mailboxes were part of the regular U.S. Postal Service operations. In fact, the Obama-Biden administration had even removed a total of 14,000 mailboxes within a year alone.

In addition, Cher also posted that the President is gearing towards a “dictatorship” government, by “gutting” the U.S. Post Office services as a way to prevent a nationwide mail-in vote system.

Just last week, Cher was embarrassed after she documented her attempt to apply as a volunteer for the U.S. post office. Unfortunately, the postal services clarified that they do not accept volunteer workers.

OK,Called 2 post offices In Malibu.They were polite.
I Said”Hi This Is Cher,& I Would like to know If you ever take Volunteers⁉️Lady Said She Didn’t Know & Gave Me # Of Supervisor.I Called & Said Hi This is Cher Do U Accept volunteers.”NO,Need
Fingerprints & Background Check”😥

In another futile attempt, Cher tried to encourage support for Biden in a USPS rally. However, the rally failed to gather a crowd despite the best efforts to carry a sign which read, “Hey Senate! Snap Out of it!”

Take ACTION in support of postal workers, 39% are people of color, 40% are women, and 16% are military members and veterans, many of whom have lost a substantial portion of their income due to DeJoy's service cuts. https://t.co/lrMNRvXzz2 #SaveThePostOffice #WeWillDeliver pic.twitter.com/pg4YS5b2A1

Other Hollywood stars such as Chelsea Handler made a slew of accusations, ranging from her false claims that the President is “‘terrorizing”’ America, to another wild statement that a vote for Trump is also a vote for “white supremacy.”

The discord in today’s America is being caused by Trump. If you are scared and fearful, it is because of him and his supporters who own guns. If you are rich, and are thinking about your taxes, remember that a vote for Trump is a vote for white supremacy. https://t.co/lcHqNktAyo

Even country star Kacey Musgraves also declared that a vote for the President is another vote for “violence.”

To each their own but know what your vote means. pic.twitter.com/4T7OWmbtqS