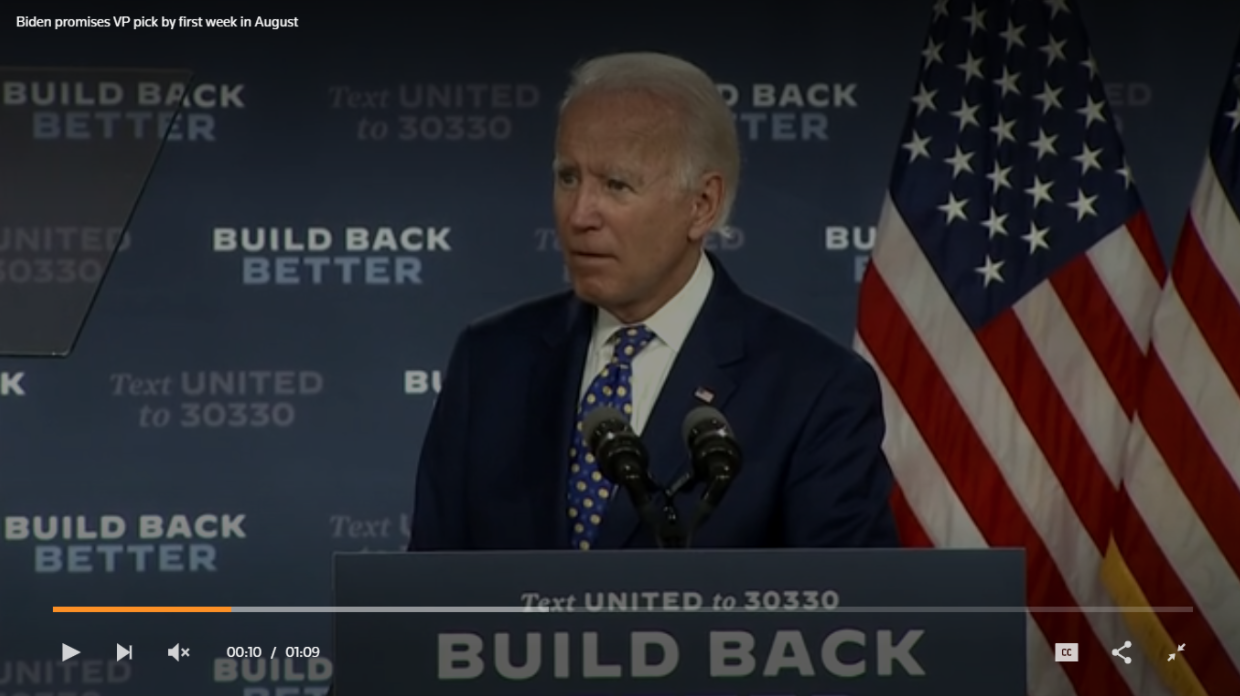 Aging presidential candidate Joe Biden told reporters on Tuesday that he would be choosing his vice president next week. He would be making the decision before he accepts the nomination of his party at the Democratic National Convention. Biden’s choice of who will be his running mate has drawn more interest than usual when compared to other candidates because of his age. Biden will be 78 years old in case he wins the presidency. That would make him the oldest president in the history of the United States. That is if he wins.

His age should not that be big of an issue if he is in good health, but the problem is that Biden has been showing clear signs of dementia and cognitive decline. Every time that he makes a public statement, he shows evidence that his cognitive functions are slowly declining. That’s the reason why the Democrats are trying to keep him in the “basement,” using the pandemic as an excuse. They want to hide just how bad Biden’s condition is. But they can not hide him forever. Whenever he does an online interview now, an aide is ready to cut in whenever he veers off away from the conversation. That’s what happened twice in interviews for Arizona TV stations.

So, Biden is clearly in no condition to run the country, and whoever is chosen as his vice president will have a major role in the government. Biden already promised that he would be choosing a woman for his running mate who has narrowed down the options, but it’s still a crowded field. His options range from the comical Stacey Abrams to the sinister Hillary Clinton.

Analysts agree that the most likely choices would be his former rivals who tried running for president. Others tout Kamala Harris is the most likely candidate now since she is also a person of color, which would meet the demands of some of the far leftists. As for Hillary, there is always the possibility that she will be the one chosen. Suppose Biden does choose Hillary, then the election would be a showdown between Trump and Clinton once again like in 2016. Biden wouldn’t matter at that point as he is just some puppet that would be discarded if he ever wins the election. Others have pointed out that the only way for Hillary to fulfill her ambition to become president is by being picked as a VP and then forcing Biden to retire if they win.