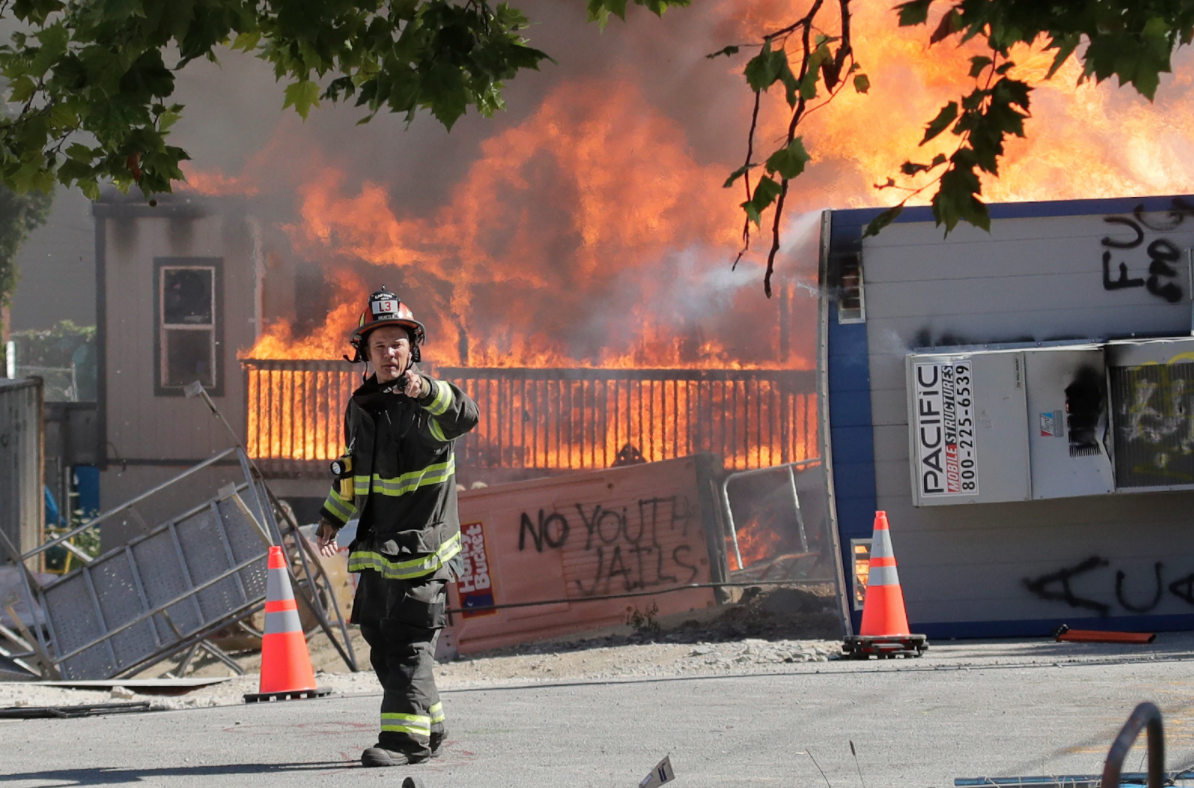 Across the country, different cities, including Seattle, held what was supposed to be a peaceful show of solidarity over the ongoing political unrest in Portland. Unfortunately, the scenario was far from peaceful as protesters threw explosives against law enforcement authorities, leading to more than two dozen police officers injured.

On Sunday, the Seattle Police Department confirmed that twenty-one police officers were injured after the violent physical attack on the department’s East Precinct. Most of the officers sustained knee injuries after a bomb exploded. Moreover, two others suffered lacerations and abrasion injuries from neck burns and were subsequently treated by the Seattle Fire Department.

Seattle’s East Precinct was hit with an explosive. This is from the interior. This isn’t peaceful. pic.twitter.com/B8FHtfoyXT

Earlier today, at least 1 person breached a fence line @ the East Precinct. Moments later, a device exploded leaving an ~8” hole in the side of the precinct. This was one of several dangerous incidents that led SPD to declare today’s incident a riot. Arson/Bomb dets investigating pic.twitter.com/pGC3kpQzhT

The group was able to successfully break into the city’s East Precinct. The rioters vandalized the building wit spray paints. They have also tried to disable the security camera and destroy a fenced perimeter around the precinct.

According to a report from Fox 10, around 1,000 people have gathered on Saturday for a peaceful march in solidarity over the ongoing protests in Portland. However, two hours later, the situation escalated as members of the terrorist organization, Antifa, started to set fire at a construction trailer at a Juvenile Detention Center. The protesters have even attacked camera crews.

Before reaching East Precinct, the group of protesters went into the Capitol Hill, where they also threw debris, including bricks, rocks, mortars, and even other forms of explosives against the officers. As a result, as much as 45 people were arrested in connection to the violent assault, obstruction, and failure to disperse.

The aftermath of the attacks was completely disheartening, In a Twitter post from Sizzane Phan, rioters burned down and broke the juvenile center’s glass windows. Even a nearby Starbucks store was completely “obliterated,” while a Canon bar and restaurant also saw shattered windows.

Just last week, Trump announced that they are planning to send an “elite tactical unit”’ to put an end to the violent protests. In a report from The New York Times, agents from the Special Response Team operated under U.S. Customs and Border Protection were deployed in Portland and Seattle.

Speaking for the same media outlet, Democrat and Seattle Mayor Jenny Durkan claimed that she had communicated with acting Homeland Security Secretary Chad Wolf, who had told her they will not be sending any federal officers unless the municipal leaders have indicated so.