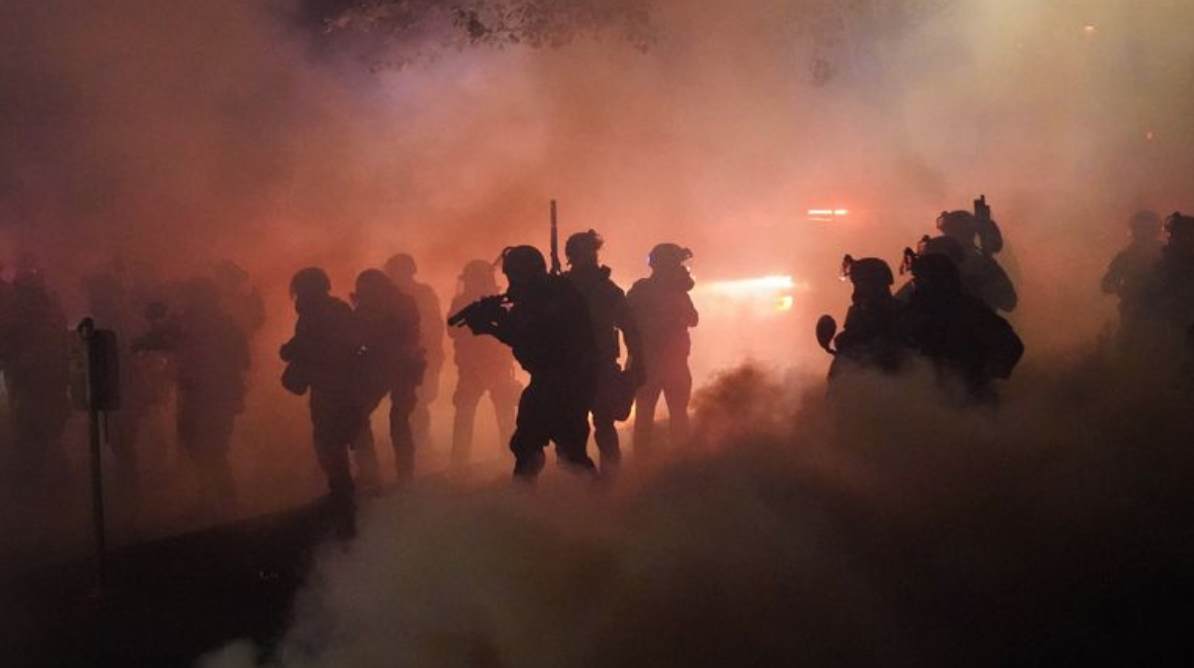 Chaos continues to escalate for 60 straight nights in Portland. On Saturday, violent protesters had successfully torn down the barricade of a federal courthouse, leading to a vicious physical attack against police officers.

According to the Acting Department of Homeland Security Secretary Chad Wolf, six federal officers were injured after protesters have successfully broken into the federal property. With the extent of the damage, Wolf accused the city officials of doing nothing to control the situation and demanded that they make the protesters accountable for their actions.

Day 56. Last night six DHS law enforcement officers were injured in Portland. To be clear, criminals assaulted FEDERAL officers on FEDERAL property…and the city of Portland did nothing. pic.twitter.com/lzPPBl060y

Despite the rising tension, the Portland Police Department confirmed that the situation has escalated as thousands of protesters have gathered at the Mark O. Hatfield Federal Courthouse. The police department narrated that some of the demonstrators threw rocks, bottles, and “assorted debris” on the building. To add more harm, demonstrators have set fires along SW 3rd Avenue while some launched “‘mortar style fireworks.” In fact, one officer was hit in the head by a projectile.

Officer hit in the head with projectiles thrown by ‘peaceful protesters’ pic.twitter.com/eZ8jDgtXNE

In addition, the demonstrators have also made a great effort to destroy the fence surrounding the courthouse. Some of the demonstrators shook the fence; others used power tools to cut through while some had even used fireworks and other explosives to bring down the barricade. The Police department stated, “People wore gas masks, carried shields, hockey sticks, leaf blowers, flags, and umbrellas specifically to thwart police in crowd dispersal or attempt to conceal criminal acts.”

PORTLAND: While Antifa and BLM rioters breached the federal courthouse

Right after I got shot by a rubber bullet in my crotch (2 inches from my PP) pic.twitter.com/xKb5Ubkykx

At approximately 1:03 a.m, the crowd attached a chain and manually pulled down a section of the fence. The barricade gave in as the protesters had successfully infiltrated the building. It had gotten to the point where the demonstrators were physically assaulting the law enforcement officers. Video footage showed some of the protesters had even shined lasers into the officers’. In a statement from Federal Protective Service (FPS) Deputy Director of Operations Richard Cline, at least three officers were left with permanent eye injuries from the incident.

These are the types of high powered lasers rioters have used to damage the eyes of law enforcement. #PortlandRiots #antifa pic.twitter.com/Es5bieo2LO

In the midst of the violent protest, one man was stabbed. The officers at the scene immediately responded to the situation and were able to call in an ambulance and medic to provide first aid help to the victim. The police have already launched an investigation and have already taken a suspect into custody.

The protesters have even used mothers as a way to gain sympathy for their cause. According to footage that was uploaded by Human Events Managing Editor Ian Miles Cheong, he called out “the Yellow Bloc,” referring to a group of “moms”’ who were wearing yellow.

Those "moms" are linking arms with Antifa. Welcome to the Yellow Bloc.

As the tension continued to escalate, the Portland Police concluded, “this level of violence and tumultuous conduct and were either intentionally or recklessly creating a grave risk of public alarm” that they declared a riot.”

Unfortunately, the city officials had already made it clear that they do not have any plans to support federal law enforcement officers in their mission to quell the political unrest. In fact, just last week, the city officials made a unanimous decision to ban the Portland Police Bureau to help the DHS in responding to the riots. They even went as far as to threaten local officers about a disciplinary action once they failed to follow the city’s orders.