A University of Cambridge Professor announced that she had been promoted to full professorship after she posted a sick tweet that read “white lives don’t matter.”

While the academe had become a proponent of the anti-racism movement, there had been glaring hypocrisy when it comes to discussing issues about white privilege. Dr. Priyamvada Gopal, who teaches in the Faculty of English, sparked outrage when she wrote “I’ll say it again. White Lives Don’t Matter. As white lives.” 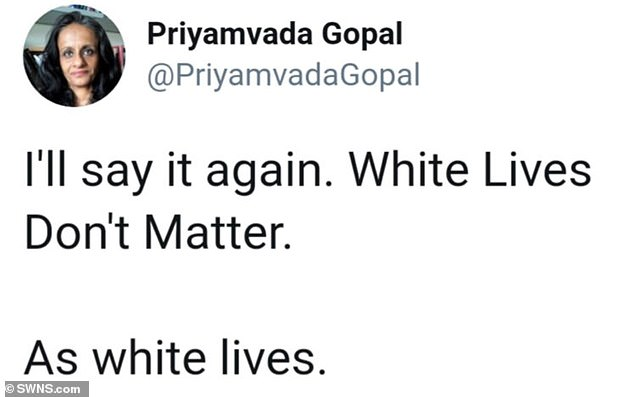 In an interview for The Guardian, the professor admitted that she had received a barrage of threats against her, including a man who sent her a picture of a noose, with the warning that they are coming for her, “you n**er loving piece of sit,” the letter read.

The professor also blasted King’s College claiming that she had consistently received “racist profiling and aggression by porters.” After working for17 years, Gopal dropped her decision to stop supervising the students in the college, as a favor for her, and on behalf of the people of color, adding that “enough is enough.”

By Wednesday night, Gopal announced that she had received a promotion from the University and took to Twitter to thank her haters. She also followed up that her Twitter ban had been lifted, and that the Cambridge Cops are following up with the threat and hate mails she received. Gopal then defended her statement saying that Twitter had deleted her statements.

Thanks to everyone who wrote to @Twitter: the ludicrous ban has been lifted. I am therefore delighted to share with you personally, that last night Cambridge promoted me to a full Professorship. The hate mails & threats are coming in non-stop but @CambridgeCops are following up

Moreover, she also denied that she had incited any violence or bigotry, by saying that she was clearly speaking about the “ideology” of white supremacy, and not to the people, “My Tweet said whiteness is not special, not a criterion for making lives matter. I stand by that.” She also continued that “You cannot oppose Black Lives Matter with ‘white lives matter’ because they are not comparable. Whiteness is already valued but the blackness is not.”

Gopal’s insensitive tweets sparked outrage that a petition was launched to make her accountable. The petition which read “Fire Cambridge Professor for Racism” was posted at change.org.

However, instead of making Gopal accountable for her hateful statements, the University chose to defend her by saying that members of the academe have the right to express their own opinions. While Gopal claimed that “white lives don’t matter,” the University condemned any attacks or threats against the professor, describing it as completely “unacceptable.”

The University defends the right of its academics to express their own lawful opinions which others might find controversial and deplores in the strongest terms abuse and personal attacks. These attacks are totally unacceptable and must cease.

Even the University and College Union (UCU) also stood by the professor. In fact, the Union stated that the attack against Gopal was both “sexist” and “racist” in nature for her decision to stand up against “white supremacists.” The union also expressed their pride with the professor and the collective support for the supporters of the “BlackLivesMatterSolidarity.”

However, the University reacted differently when they halted a fellowship invitation to Jordan Peterson for a photograph of him standing beside a man wearing a shirt that says “I’m a proud Islamophobe.”