Just like her mother, Nancy Pelosi’s daughter, Christine, had long-standing hate for Republicans. She even went as far as to encourage and justify the 2017 assault on Sen. Rand Paul.

In her Twitter post, Christine wrote, “Rand Paul’s neighbor was right,” after news broke out that the senator had been infected by the deadly coronavirus. She shared Sen. Mitt Romney’s announcement that he chose to be in self-quarantine after having close contact with Rand Paul both in the senate and congressional events. 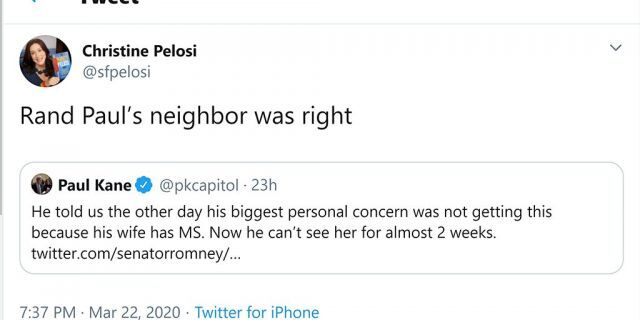 Romney also encouraged the bipartisan senate to finally approve Trump’s $2 trillion economic relief package. However, instead of being sympathetic to her fellow American, Christine used the opportunity to bring in the 2018 assault on Sen. Paul.

The incident happened when the senator’s Bowling Green neighbor, Democrat Rene Boucher, tackled Paul while he was mowing his lawn. Due to the incident, he suffered five broken ribs as surgeons even have to remove a part of his lung. This made the senator even more vulnerable to the virus.

On the other hand, Boucher was charged with assault and spent 30 days in prison. According to Paul’s attacker, the attack was not politically motivated and might have been a result of a neighborly misunderstanding.

Moreover, Paul also received a massive backlash for not immediately going into quarantine. The senator defended himself by saying that he was asymptomatic, adding that “For those who want to criticize me for lack of quarantine, realize that if the rules on testing had been followed to a tee.” He also said that since he does not exhibit the symptoms, he would have never been tested, and would still go around spreading the virus. However, Paul claimed that he took the test as an “extra precaution” since he already had a damaged lung as a result of Boucher’s assault. The Centers for Disease Control and Prevention also recommended that anyone who exhibits or experience signs and symptoms of the virus should get tested and self-isolate.

Twitter users were also quick to slam Christine over her insensitive comments. Sean Davis, the Co-Founder of Federalist, wrote that the House Speaker’s daughter had just encouraged a felony.

GOP rapid response director Steve Guest also described Christine as one who has the most “disgusting” tweet on the social media platform while US veteran Douglas Kerr called her evil.

Leave it to Christine Pelosi @sfpelosi (Nancy Pelosi's adult daughter) to have the most disgusting take of the day on twitter dot com.https://t.co/kGN4It6Isg pic.twitter.com/qXC8xlsVdu

This is beyond evil.

Another Twitter user commented that her statements were “sickening.”

Whoah... this is kind of sickening

Christine’s mother, Nancy, was to blame for the growing bipartisanship in the senate. The politics had even gone as far as to cost Americans immediate economic relief, as the Democratic party was busy blocking off Trump’s $2 trillion economic relief package.