Hollywood lefty Cher claims President Donald Trump is a “murderer.” In a tweet that she sent out on Saturday morning, the old entertainer seems to imply that the president is knowingly withholding all of the resources that he has access to, which are needed to fight the virus. She also said that the president is a liar and called on the people to open their eyes. 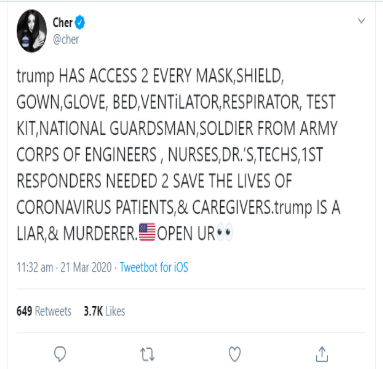 This is not the first time that the has-been singer has expressed her inexplicable anger towards the president. Back on April 22, 2018, she said that the president is cancer. She claimed that he would take away the freedom of the press and imprison reporters so they would be forced to lie for him. In another instance, she labeled Trump a “rat” who stole the election with the help of Putin.

Cher is not the only Hollywood celebrity to go public with some insane claims against the president. Actress Bette Midler, in a desperate attempt to get noticed again and stay relevant, made the suggestion that President Trump was lying about his negative test result for coronavirus. She said that the president had lied thousands of times, so he must be lying about that too.

You know, #Donald says he has tested negative for #Coronavirus. But why should we believe him? He has lied over 16,000 times in the last three years! Why would he not be lying now?

Rosanna Arquette, who is supposed to be an actress, pushed a conspiracy theory when she tweeted that Israel has been working on a vaccine for the coronavirus for more than a year and that the company connected to the family of Jared Kushner is one of the companies that have partnered with Israel in developing the vaccine. She is implying that Israel and the Trump administration are somehow working together to bring the coronavirus into the world and to profit from it.

She deleted her tweet after receiving a backlash and being accused of being anti-Semitic. She later explained on later tweets that she confused different strains of the virus with each other and said that she’s not anti-Semitic because her mother is Jewish. It was not clear where Arquette’s conspiracy theory originated or if it’s something that she came up with herself.

The mainstream media and the Hollywood elite have been trying to smear the president and his response to the coronavirus. This is the latest of the many things which they are trying to do to bring President Trump down. The rest of the American public has great confidence in the president’s skill and leadership, and the federal government’s response to the coronavirus is ramping up now.