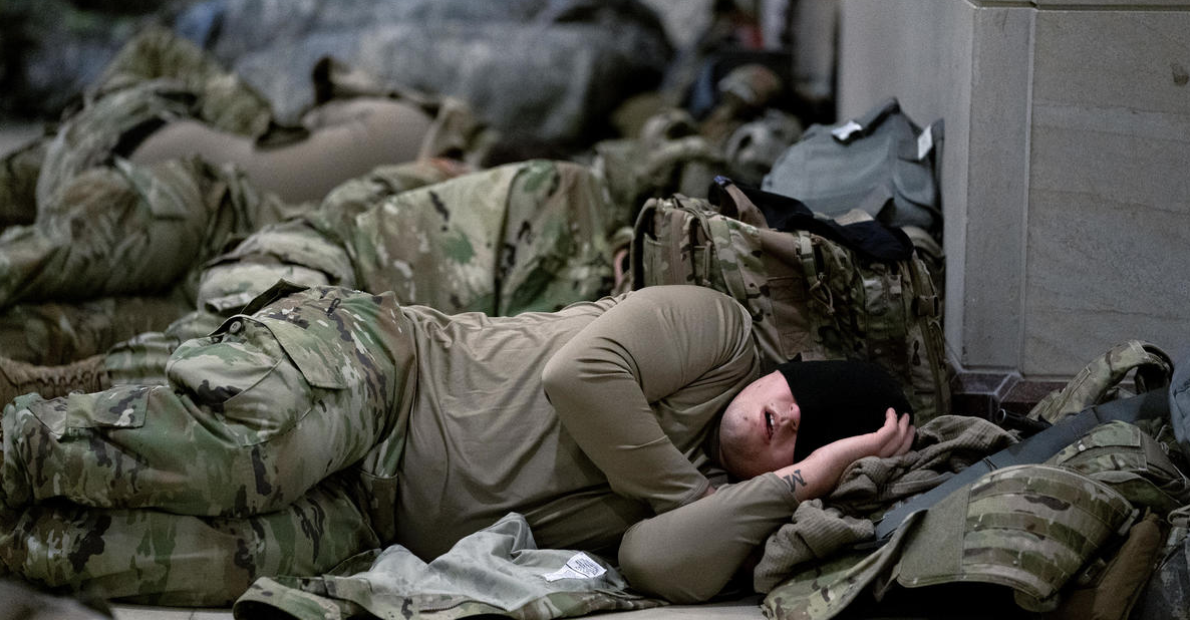 According to a Daily Wire report, 25,000 troops were forced to vacate the congressional grounds. Unfortunately, the administration failed to provide a decent place for the troops to stay, and were instructed to sleep in cold parking lots under horrible conditions.

In an interview with Politico, one of the Guardsmen said that during the Inauguration day, Senators and Congressmen were eager to take photos and thank them for their service. However, he noted that they received a completely different treatment a day after Biden was sworn into office. “Within 24 hours, they had no further use for us and banished us to the corner of a parking garage. We feel incredibly betrayed,” the Guardsman said.

Politico also confirmed that the guards were instructed to vacate the Congressional building. The troops were told to rest at a nearby parking lot after their 12-hour shifts. A source from the Dailywire also claimed that Democrat and House Speaker Nancy Pelosi specifically demanded that as many as 14,000 National Guard troops be deployed in the Capitol. Unfortunately, the House Speaker’s office failed to provide a logistical plan to accommodate the troops.

And if you want to use the bathroom, well pic.twitter.com/YXLawaqA0Q

In a social media post by conservative host, Benny Johnson, he wrote that according to his source in Washington D.C. 5,000 Guardsmen were forced to rest on cold parking lots, share one power outlet, and one bathroom. Johnson also shared a video of the troops huddled together in the parking lot.

MILITARY SOURCE IN DC:
“For the last week my battalion has been sleeping on the floor in the Senate cafeteria. Today the Senate kicked us out & moved us to a cold parking garage.
5000 soldiers.
1 power outlet.
One bathroom.
This is how Joe Biden’s America treats solders.”

As a result, several lawmakers stepped in to demand better living conditions for the troops. Republican Sen. Joni Ernst tweeted that as a former National Guard member, the administration’s poor treatment is simply unacceptable. Ernst also thanked the troops for their service.

Simply unacceptable. You’re always welcome in my office. As a former Iowa National Guard member, I know how hard it is to wear those boots. Thank you for your service everyday. https://t.co/WNjSEsQUMV

Another Republican Sen. Kevin McCarthy slammed Senate Majority Leader Chuck Schumer and Pelosi. McCarthy demanded that the troops should be given better treatment and a higher sense of respect.

Speaker Pelosi and Majority Leader Schumer—why are American troops who are tasked with keeping security at the Capitol being forced to sleep in a parking lot?

They deserve to be treated with respect, and we deserve answers. pic.twitter.com/J0R2dRC8bM

Even GOP Texas Gov. Greg Abbott finally had enough and demanded the return of the Texas National Guard from D.C. Previously, Abbott had also shared his concerns over the deployment of the Texas Guardsmen for Biden’s inauguration amid reports of a possible Capitol attack. https://twitter.com/GregAbbott_TX/status/1352466264464232449?s=20