NY Post to Trump: “Stop the Insanity, You Lost the Election” 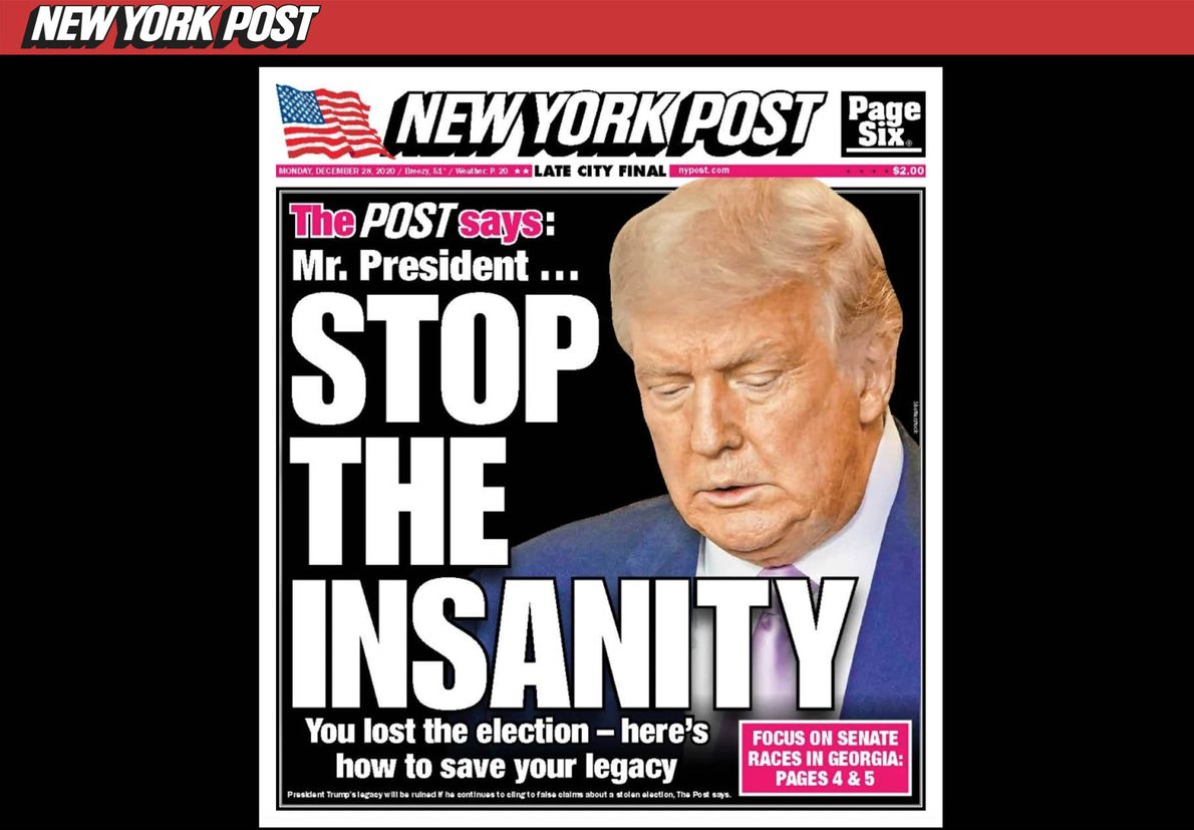 On Monday, right-wing media outlet the New York Post pleaded with President Donald Trump to “stop the insanity” and concede with his election loss citing that it might bring even more damage to his political legacy.

The newspaper splashed the bold words on its headlines, “The Post says: Mr. President… STOP THE INSANITY, You lost the election- here’s how to save your legacy.” The front-page news also featured a photo of the President. Following its headlines, the newspaper continued with an editorial article saying that “Mr. President, it’s time to end this dark charade.”

The Post explained that they understand that Trump is “angry” that he had lost the 2020 elections. However, the media outlet warned the President that if he continued to contest the results, the consequences will be “ruinous” for his own political career. In fact, the editorial team went on to suggest that refusing to accept former Vice President Joe Biden’s win is complete madness. Referring to a character from Shakespeare’s play, they wrote that it would depict Trump as the “The King Lear of Mar-a-Lago, ranting about the corruption of the world.”

The editorial team also criticized the President for listening to his lawyers. They characterized Sidney Powell as “crazy’’ despite the fact that Trump’s personal attorneys denied that Powell is part of his legal team. They also bashed Powell’s client, former National Security Advisor, Michael Flynn who suggested that the President can implement “martial law” if the courts refused to give in. The Post even believed that Flynn’s suggestion should be considered as a form of treason. “It is shameful,” the media outlet added.

The media outlet also believed that the President’s action might affect the results for the upcoming run-off elections in Georgia. The Post believed that the growing concerns over Trump’s refusal to concede might cost Republicans it’s Senate Majority seat.

The Post reminded Trump that they have nothing against him. In fact, they had even endorsed him in his presidential run in 2016. However, the media outlet believed that it is now time for the President to move on.

The editorial team also left a piece of advice for Trump, “If you want to cement your influence, even set the stage for a future return, you must channel your fury into something more productive.” The Post explained that the questions over Trump’s re-election will overshadow his own initiatives. Finally, they also added that the Democrats would continue to accuse him of baseless investigations over his Presidential win. Currently, media mogul Rupert Murdoch owns the Post. In addition, he also owns other media outlets such as The Wall Street Journal and serves as the co-chair of the Fox Corp. who also owns Fox News. The media outlet was also the first to expose Vice President Joe Biden’s son, Hunter’s private emails linking the entire family’s dubious foreign business deals.

The media outlet released an editorial article after Trump announced that he will hold an event on January 6th.

See you in Washington, DC, on January 6th. Don’t miss it. Information to follow!