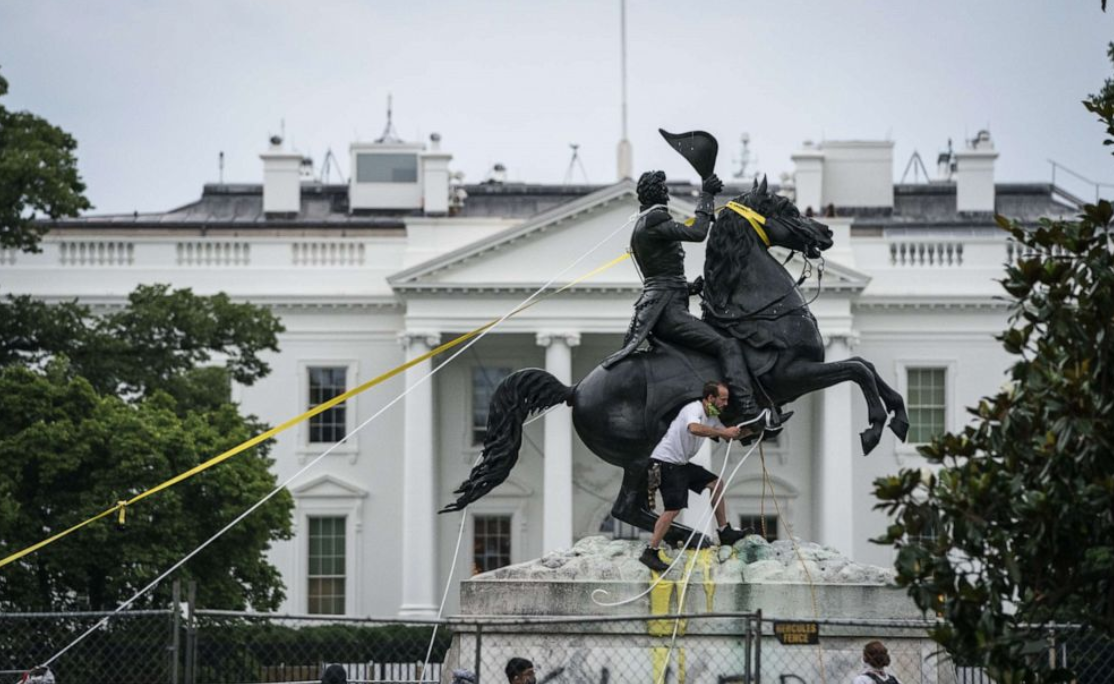 The U.S. Attorney’s Office for the District of Columbia announced Saturday that four men have been charged for trying to destroy the statue of Andrew Jackson located near the White House. The suspects: Connor Matthew Judd, Graham Lloyd, Ryan Lane, and Lee Michael Cantrell allegedly tried to yank the statue out of its place and damage it. Unfortunately, for the suspects, they allegedly committed the act of vandalism on federal property, which can mean severe punishment if they are proven guilty. Other suspects that acted with the four who were arrested are being tracked down.

“This Office remains steadfast in its commitment to protect the sacred First Amendment right of individuals to peacefully protest, but these charges should serve as a warning to those who choose to desecrate the statues and monuments that adorn our nation’s capital: your violent behavior and criminal conduct will not be tolerated.” The acting U.S. Attorney Michael R. Sherwin said in a statement.

The Department of Justice has announced that it is creating a task force that will be dealing with anti-government rioters who have been destroying monuments and statues. Attorney General William Barr has revealed that the task force is currently investigating 500 acts of violence and destruction that were perpetrated in the middle of the protests that came after the death of George Floyd while being arrested in Minneapolis.

The President is also acting to make sure that monuments and other historical landmarks are protected. On Friday, he signed an executive order which aimed to protect federal monuments all over America. He promised long prison terms for anyone who goes against the United States.

The rioters have demands that are increasingly unreasonable and unrealistic. Many are demanding police departments be defunded or abolished all over the country. Such a move will be exploited by criminal elements who will take over a city with no police. They are also calling for the taking down of statues that do not conform with their world view. They are even demanding that religious statues be taken down because those represent white supremacy.

Unfortunately, many local governments, particularly those run by Democrats are giving a free pass to the Black Lives Matter movement and Antifa which are behind most of the protests. A good example would be the mayor of Seattle who did not do anything about the so-called Capitol Hill Autonomous Zone until shooting incidents killed one person and injured several.