“Foolish”, “Out Of Touch,” Jennifer Aniston Bashed After Posting A Christmas Ornament Engraved With “Our First Pandemic” 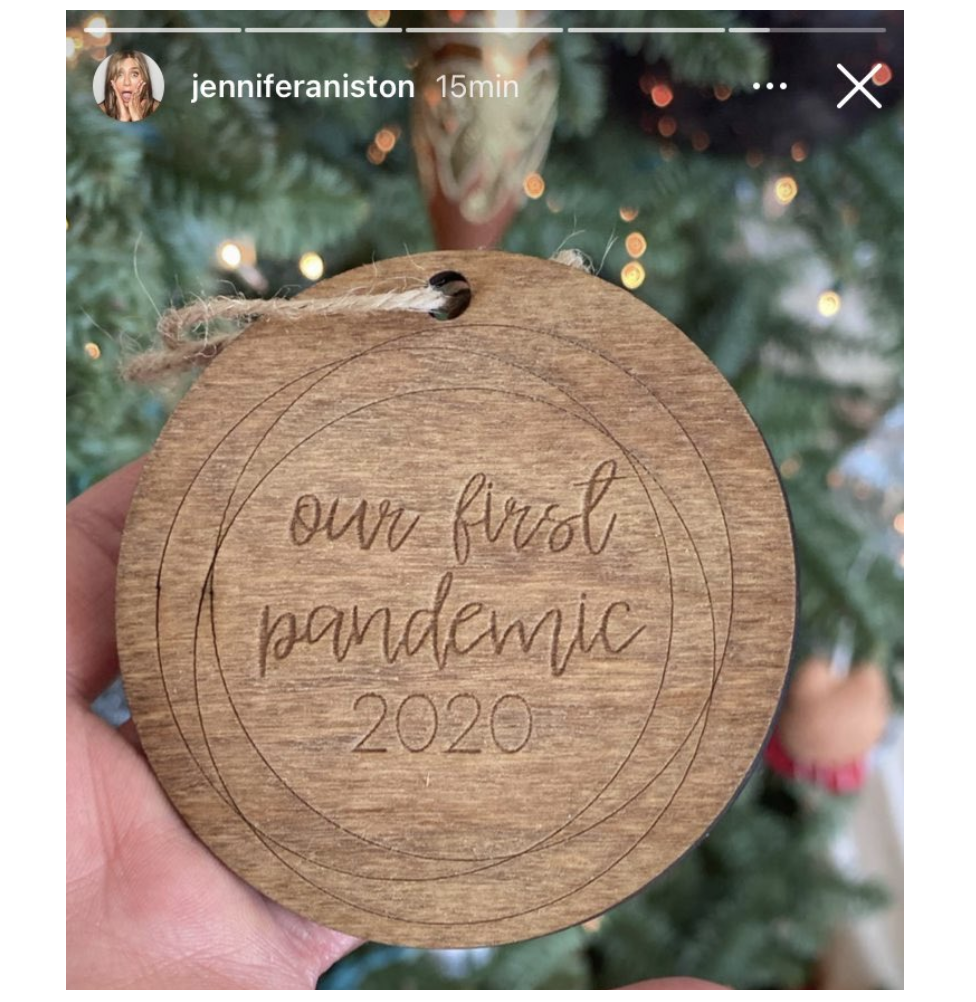 On Saturday, actress Jennifer Aniston briefly trended on Twitter after getting slammed and criticized by social media users after seeing her post a very unfunny, unwitty, and out of touch Christmas tree ornament.

The FRIENDS star uploaded a photo of her prized Christmas ornament on her Instagram stories, and shortly after, it spread on Twitter. The ornament was engraved with the words “Our First Pandemic 2020.”

A watcher of her stories was so unhappy about the star’s choice of Christmas ornaments that they uploaded Aniston’s photo on Twitter. They captioned the post with, “Jennifer please,” and it has now received over 45,000 retweets and more than 500,000 likes.

People on Twitter were clearly unhappy and unimpressed by Aniston’s poor choice of decor and replied with their reactions.

One user said that if this was made in February or March, it would’ve been taken as a light joke, but not now when the whole world has been suffering from the deadly coronavirus for a year. They also added that “this just shows how out of touch Hollywood is with the rest of the world.”

if this was in februari/march it would've been received well as a joke. but at this point its not something to joke about anymore, and definetly not something to use as a christmas ornament. this just shows how out of touch Hollywood is with the rest of the world.

Another replied, saying, “Celebrities really live in a different world.” Followed up by someone who tweeted, “I’m so tired of celebrities. Leave that shit in 2020.”

One user quote tweeted the post and said, “Dude f_ck Jennifer Aniston all celebrities have done during this pandemic is show how out of touch and just fucking oblivious they are to anything that doesn’t have to do with them.”

Dude fuck Jennifer Aniston 🙄 all celebrities have done during this pandemic is show how out of touch and just fucking oblivious they are to anything that doesn’t have to do with them. Some people’s entire family have died but at least Aniston is showing how quirky she can be 🤪 https://t.co/afLQ7wQHk0

“why do celebrities not use logic?” asked one Twitter user. “I don’t know why but its just not cute,” said another. “So many people died and so many people’s life got f%ked.”

One user spit facts, saying, “They aren’t affected by this at all. They still go out, travel, make money hang out. Then post stuff like this trying to seem like they relate w/ us and all it shows is that they don’t.”

They do. Thy aren’t affected by this at all. They still go out, travel, make money hang out. Then post stuff like this trying to seem like they relate w/ us and all it shows is that they don’t.

Another brought up an old interview of Aniston where she referred to Covid-19 as a “blessing” and described the chaotic BLM movement as “oddly beautiful.”

Y’all remember when she called COVID “a blessing” and the BLM movement “oddly beautiful” pic.twitter.com/MuPC2jP5Me

Aniston is part of Hollywood A-listers who were very vocal about their hate against President Trump. Earlier this year, she joined her former co-stars Courtney Cox and Lisa Kudrow in calling for people to vote for the Democrats.

In October, Aniston posted a picture of herself on her Instagram showing her dropping a ballot in San Vicente Boulevard in West Hollywood. Addressing her 35.7 million followers, she captioned her post with “I dropped my ballot off, and I did it early. I voted for them because right now this country is more divided than ever. Right now, a few men in power are deciding what women can and can’t do with their own bodies. Our current president has decided that racism is a non-issue. He has repeatedly and publicly ignored science … too many people have died.” Aniston continued: “I urge you to really consider who is going to be most affected by this election if we stay on the track we’re on right now … your daughters, the LGBTQ+ community, our Black brothers and sisters, the elderly with health conditions and your future kids and grandkids (who will be tasked with saving a planet that our leadership refuses to believe is hurting).”

Now, the same 35.7 million followers saw just how out of touch with reality she really is. Just like her fellow celebrity liberals, all they do is talk, criticize, and be hypocrites.