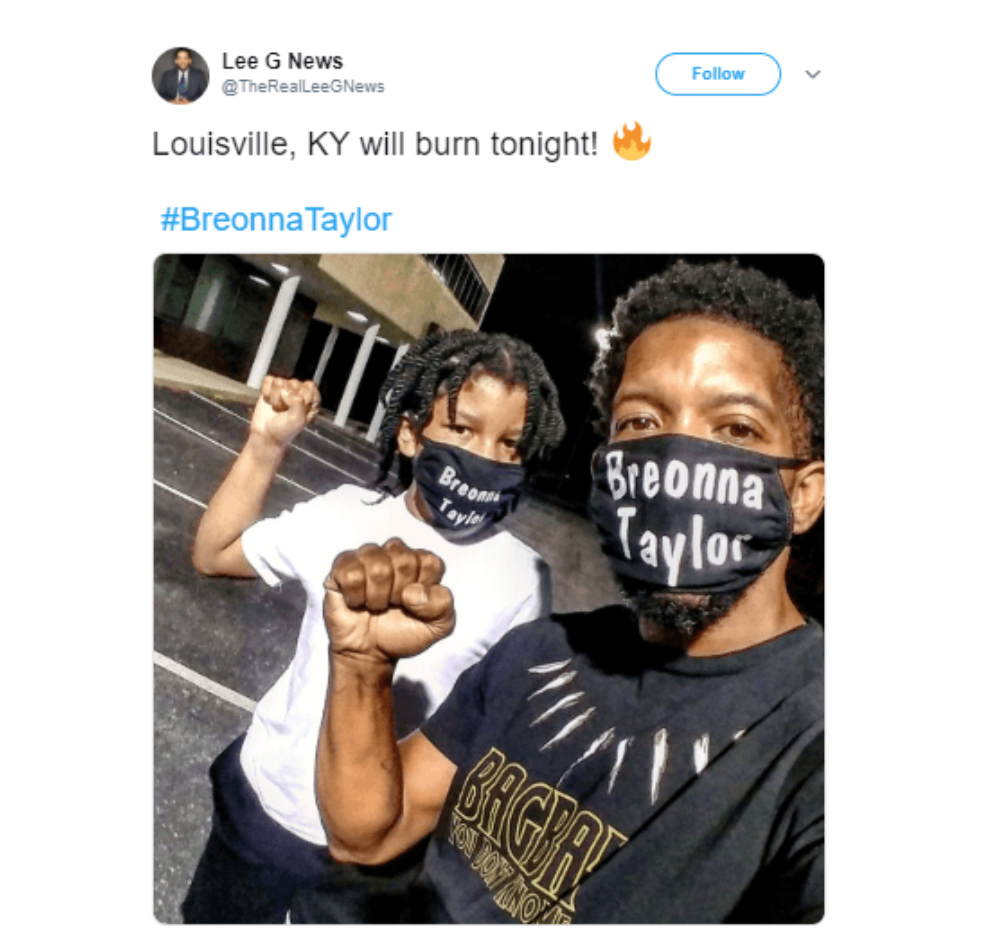 Twitter approved a tweet that threatened to burn down the city of Louisville, KY, which was posted one day before riots broke out in cities again. According to a spokeswoman for the social media giant, the tweet did not violate any of the policies of the social media platform even though it has censored so many conservatives, it has even censored the President for saying non-controversial things. The company claims that it is dedicating itself in 2018 to improving “conversational health” on the platform.

“Louisville, KY will burn tonight,” read the controversial tweet by Lee G News, an independent black vlogger with some following. The tweet featured a picture showing two persons showing raised fists while wearing masks that bear the name of “Breonna Taylor.” The account is not very popular and just had a moderate-sized following. Still, twitter’s refusal to condemn such a blatant call for violence illustrates the hypocrisy of the people running Twitter. The violence instigated by such posts and others like it is causing so much damage now in American cities. The account holder has since deleted the tweet, but it has been shared enough times that there are few copies of it going around online. That tweet was not alone in calling for violence and destruction, but it seems that Twitter is not keen on doing anything against the people who tweeted them.

And I hope they burn Louisville down tonight, yll hear me? Burn it down, the college the precincts the whole thing

“And I hope they burn Louisville down tonight, yll hear me? Burn it down, the college the precincts the whole thing,” read another tweet. This is the kind of violence being promoted by those on the left. They will be using the case of Breonna Taylor just as they have used the death of George Floyd for justifying rioting, looting, and even murder all in the name of racial justice. This is the kind of violence that Biden and the other Democrats cannot condemn. In fact, Biden’s running mate did fundraisers to bail out the rioters who have been caught. They are supporting these riots and that’s why they cannot condemn them directly.

Hopefully, law enforcers can crack down on these criminals who are roaming the street and spreading fear while causing as much noise and property damage.