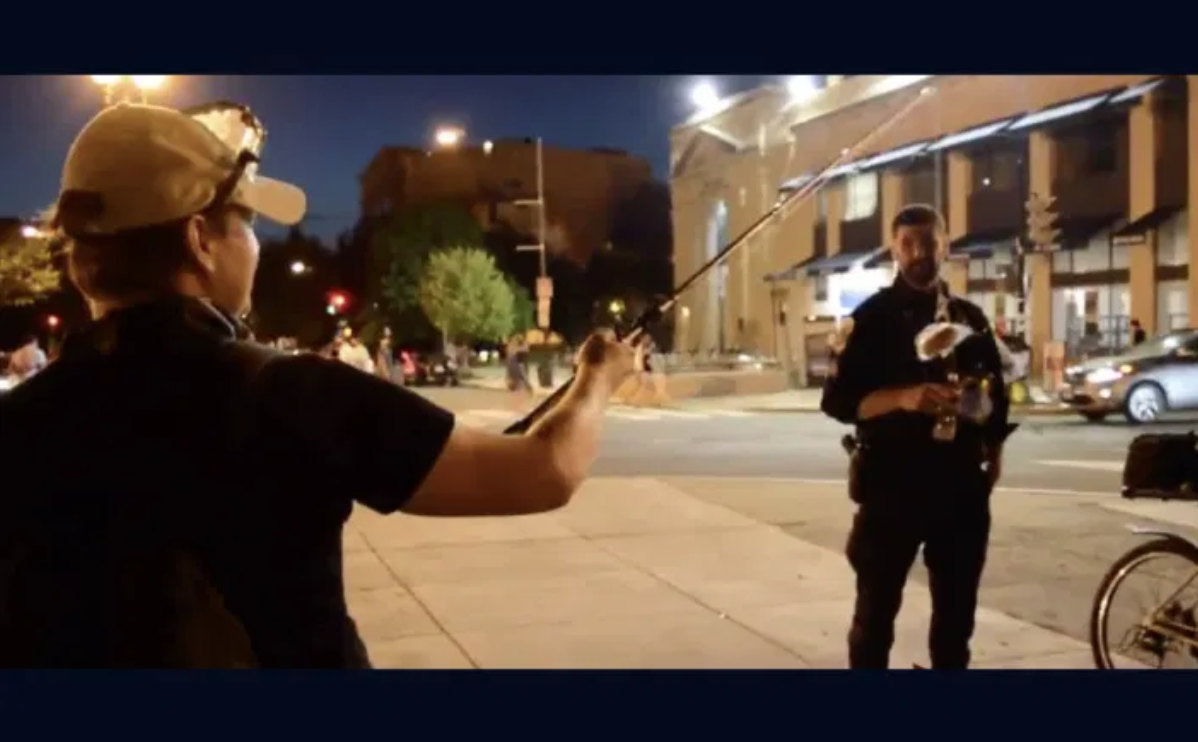 In a new crazy antic, radical left-wing protest Jason Charter mocked police officers as he called them “pigs” while he attached a donut at the end of a fishing rod as bait. As part of a ““f*** the police” march in D.C., self-described “anti-fascist” activist Jason Charter taunted police officers, whom he slandered as “pigs,” using a donut attached to a fishing pole. While the images were taken last March when Charter, a self-described anti-fascist, along with his friends attended a mutual aid station in Washington D.C, the images went viral when a News2Share’s Ford Fischer shared Charter’s images. In his social media post, Fischer wrote, “Activist [Jason Charter] is here with a donut on a fishing rod, apparently planning to ‘fish’ the cops with it.” The report added that while others were busy planning the event, Charter was ready to go police fishing, adding that none of the officers had literally taken his “bait.”

Right now: protesters are kicking off a “fuck the police” march in DC.

Beforehand though, they’re holding a mutual aid station where they’re handing food and other resources and even giving massages to people in need. pic.twitter.com/w4ZEGD2BBD

Charter then responded on social media to brag about what he did. He claimed that he went on “pig fishing” and that he had almost fooled an officer. In another troubling post, Charter, who is a white man, declared that a person’s race does not matter. He claimed that as long as you put someone in a police uniform, it immediately turns them into “pigs.” He argued by making a baseless, overgeneralizing claim that all cops “oppress minorities,” regardless of whether they themselves belong to that community.

It don't matter what race you are. If you put on a cops uniform you become a pig. People say #ACAB for a reason.

When you become a cop you enforce laws that oppress minorities. That makes you a bastard. #BlackLivesMatter

He also lamented how waving donuts in front of authorities should constitute a crime. Charter defended that he only found a “creative way” to express his right, and then everyone goes mad and crazy.

The increasing anti-police sentiments had become even more troubling. On Sunday, while two deputies were shot by an unknown assailant, members of the Black lives Matter movement and radical left-wing organization, Antifa, stormed into the hospital where the officers were being treated.

Instead of offering community support, and stating that “all lives matter,” anarchists attempted to break into the emergency room and block the hospital’s entrance and exit. They also chanted death to the police, while some also called the officers as “pigs.”

Here some video of me fishing for pigs. #BlackLivesMatter #DCProtests #Fuck12 https://t.co/G6siXRzMR5