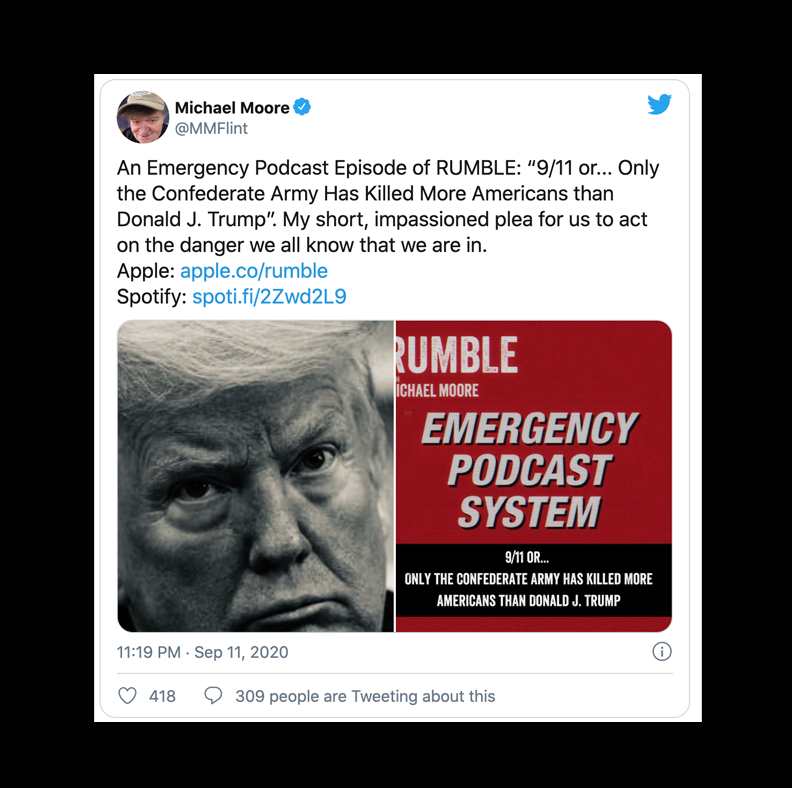 Documentary filmmaker and leftist activist Michael Moore described President Trump as a mass killer during an insane rant on September 11th. Moore also compared the President to Osama Bin Laden and said that no American since the time of the Confederates has killed more Americans. “My friends. This is murder. In the extreme. No American other than Confederate President Jefferson Davis and his General Robert E. Lee has killed more Americans than Donald J. Trump,” Moore said in a podcast. He was referring to the American death toll caused by the coronavirus.

“Think about that. Civil War. 600,000 plus dead. Thank you, Jefferson Davis and Robert E. Lee. We’re heading over 200,000,” Moore added, he cited reports that the death toll could reach 400,000 by Christmas. It is worth noting that the model on which the projections are based has a history of failing in the past.

“What if he had chosen to do what any other decent, sane, moral person would have done when informed about this national security threat?” Moore stated. This is in reference to the claim that the President was told about the danger of the virus back in January but he chose to ignore it. What Moore failed to mention and what other leftists and Democrats are choosing to forget now is that the President decided to ban travelers from China back in January. Back then, the move was branded as racists by the Democrats.

Moore admitted that the President did not kill any American with his own hands but he still bore responsibility for the fatalities. This is where he made the comparison to Osama Bin Laden. “I can tell you for a fact that Osama Bin Laden did not fly a single one of those God damn airplanes. So he’s innocent? No. Trump is a mass killer,” Moore said. “Trump stood down and knowingly allowed 200,000 Americans to die. That is 67 9/11s. Take the dead of this day, take the dead of 9/11, multiply it by 67 times and that’s how many people have died of the coronavirus. Trump knew. So much could have been avoided.”

The director then said that people should encourage others to vote so that they can vote out President Trump by November.

The claims that the President ignored the threat of the coronavirus are untrue. It was the Democrats who have tried to downplay the danger that the virus posed. Of course, they have forgotten all about that by now.