Cher is demanding the death penalty for President Donald Trump, calling him a mass murderer. The actress made the demand in a now-deleted tweet.

“THERE’S A BLAME 4 KILLING SOMEONE…ITS CALLED “MURDER”. IF YOU MURDER MORE THAN ONE PERSON YOU ARE A MASS MURDERER. THERE ARE MANY PUNISHMENTS FOR DIFFERENT DEGREES OF MURDER,BUT WHEN SOMEONE “KNOWINGLY “MURDERS PEOPLE… THE PUNISHMENT IS DEATH. Trump’s a mass murderer… hhmm,” the singer said in her tweet, which she soon deleted.

Cher continued her ranting on another thread. She admitted that she sometimes goes too far and then she shared a link to an article discussing how funds were diverted from the 9/11 program. Then she stated that she would not “fall below my moral compass,” though she did suggest that the President be out to death. 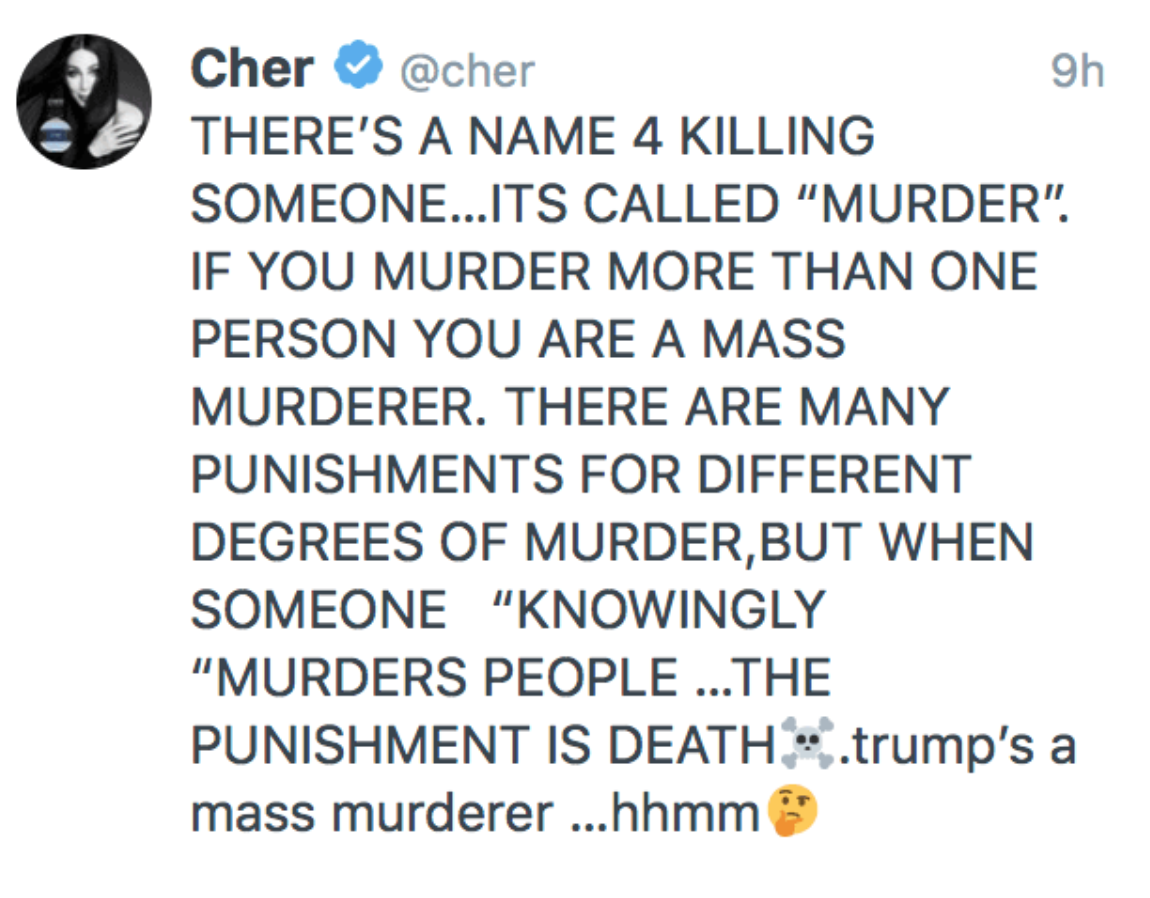 “LETS TALK…. I MUST TRY TO BE A BEACON OF LIGHT FOR YOU. OBVIOUSLY DIDNT HEAR MY HIGHER ANGELSDisappointed but relieved face,” Cher said in another bizarre rant.“I APOLOGIZE.”

LETS TALK…. I MUST TRY TO BE A BEACON OF LIGHT FOR YOU.
OBVIOUSLY DIDNT HEAR MY HIGHER ANGELS😥

This is not the first time that the old actress has gone on a bizarre outburst on Twitter after being triggered by the President. Way back in July she accused him of killing Americans just so he can hold his adulation rallies. Back then, she only suggested that he remain in solitary confinement.

Based on her tweets, she obviously views herself as someone who is better than the President or his followers. She is typical of the numerous Hollywood celebrities who are against the President and all the moves that he is making for the country. No matter what he does, they are still intensely against him.

The President instituted a travel ban on China earlier this year even before the pandemic became a global problem. Back then, his critics called the move racist but now they are saying that he should have done more. In fact, Pelosi was encouraging people to visit Chinatown back then and was taking steps to prevent the President from declaring travel bans.