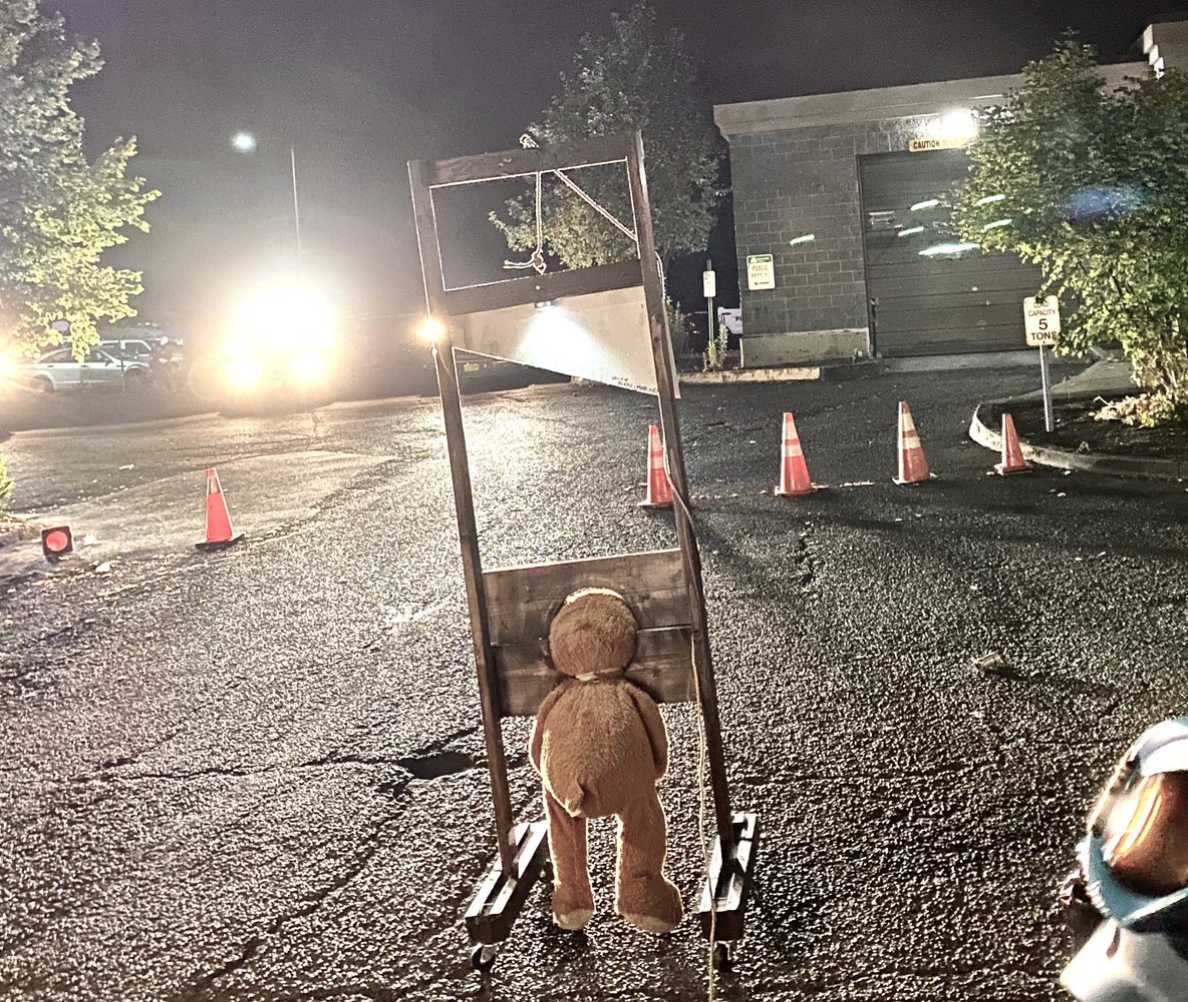 n the 86th night of Portland riots, demonstrators marched into the suburbs, carrying a guillotine and burning down an American flag as they continued to wreak havoc in the city.

On Saturday, the Portland Police Department reported that around 250 people marched into the city’s suburbs on their way to the Penumbra Kelly Building, where public safety offices are located.

The rioters brought with them a guillotine and placed a teddy bear to be decapitated. They then burned down the stuffed toy, along with the American flag. As the night progressed, the rioters woke the entire neighborhood as they gathered out in the streets, carrying weapons and armed with safety protective gear such as helmets and shields.

#PortlandRiots: Antifa showing the public a visual representation of their political agenda. They put US flags on the guillotine prop and set all of it on fire outside the SE police building. pic.twitter.com/9iLTVIPVJD

An activist screamed into a bullhorn, demanding that the residents provide them with shelters. At first, she asked what could people do to protect their neighbors, and another activist responded that people should get into the “f***ing streets.” The woman agreed, saying that rioters like her are actually providing a service to the residents. She yelled, “There is safety in numbers. We protect you every night by being out here. Please come and protect us.” The woman continued by saying that they were already exhausted from the riots and that the only thing residents could do was to provide refuge. “We are simply asking for one night, one hour,” the woman said.

Protesters call on people to let them into their houses and give them refuge as the movement progresses #Portland #PortlandProtest pic.twitter.com/tZZDVGUfov

Once the rioters arrived at the Penumbra Kelly at 11:45 p.m. a violent exchange immediately took place between the rioters and law enforcement officers. They threw in rocks, bottles, as well as target officers with paintball guns and lasers. During the riots, the city’s police department claimed that a rioter aimed a green laser at the Portland Police Air Support Unit plane. Officers noted that such an attempt is extremely dangerous, as it may result from the pilot being disoriented, and can also lead to permanent eye damage.

In a statement, the Portland police claimed that one officer was hit in the head with a glass bottle during the encounter. Thankfully, the officer was wearing a helmet which prevented him from injuries. Another member of the Portland Fire and Rescue Medic who responded with the officers, was hit in the shin with a large rock and suffered a minor laceration to the leg. Worse, they also threw balloons filled with urine and feces against police officers.

14 minutes later, the officers had to declare to ensure public safety. The sound truck, which gave out warnings, was also damaged as protesters threw rocks and eggs. Another vehicle, this time belonging to the Rapid Response Team was also hit by a rock, shattering its rear window. All throughout the riots, the police received 120 to 140 calls as residents reported violent incidents including shootings, assaults, threats, and other suspicious circumstances.

Officers pushed hard in an attempt to dissuade the rioters to leave, but to no avail. Instead, the rioters headed to the Southeast 47th avenue, where they set fire to traffic barricades, mattresses, debris, and a door at the intersection to ensure that no officers cam go through.

Earlier that day, another riot took place between members of the radical left group Antifa and right-wing supporters Proud Boys. Officers responded, but the national guard was not asked to respond.

Mass antifa vs. right-wing brawl at the Justice Center in downtown Portland. Numerous conservative groups held a pro-police rally but it was crashed by #antifa, who threw eggs, rocks, feces & urine. Both sides pepper sprayed each other for more than an hour. #PortlandRiots pic.twitter.com/M7SQy2N1lD