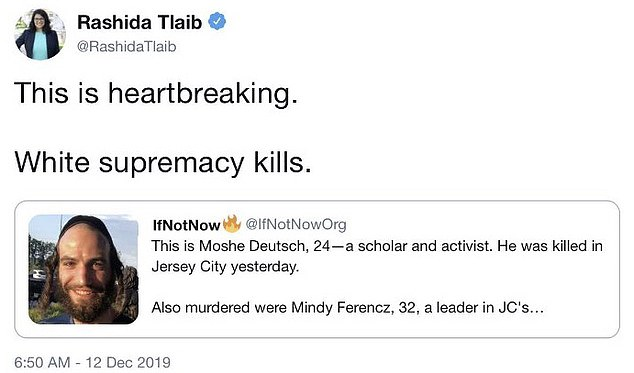 Never one to calmly wait for all the facts to come out, congresswoman and “Squad” member Rashida Tlaib (D-MI) automatically blamed “White supremacy” for the shooting at a kosher supermarket in Jersey City, NJ this week. The problem with that is, both shooters are black.

Tlaib retweeted an article about the incident and wrote, “This is heartbreaking. White supremacy kills.” After finding out how incredibly wrong she was, Tlaib deleted the tweet. What may be worse though is that after deleting the tweet, she did not tweet about it again on her personal account once she found out it did not fit her anti-white narrative.

On hearing Jews were killed.

On hearing the murderers were black supremacists.

Why is the murder of Jews only heartbreaking when she can blame white supremacists? pic.twitter.com/4BbKpFyWJN

This also caused outrage amongst the Jewish community on social media who rightly pointed out that for their community, this was incredibly serious and should not be used for political gain by a grandstanding congresswoman like Tlaib.

This is not a fucking game for us. It's our lives and livelihood. Jewish lives aren't your political football or pawn for you to claim a minor victory on twitter.

This is not the first time Tlaib has gone nuts about something on twitter, blamed people she hates, found out that it wasn’t true, then deleted the tweet without any apology. She followed this exact same playbook when she blamed the “right wing” for the Jussie Smollett fake incident in January.

Congresswoman @RashidaTlaib pounced on the Jussie Smollett story back in February, which turned out to be a hoax. She never apologized for blaming the "right-wing."