Last Sunday, Willem Van Spronsen, 69, from Washington, was fatally shot by police after he hurled explosives at an ICE detention center in Tacoma, Washington. Spronsen was a self-described member of Antifa that left behind a manifesto filled with far-left rhetoric.

A report made by Tacoma Police stated: “It was reported the male was throwing incendiary devices at the Detention Center and then at vehicles in the parking lot. A vehicle was set on fire. The male attempted to ignite a large propane tank and set the buildings on fire. The male appeared to attempt to be targeting a fleet of buses that are used to transport detainees to the Yakima airport. As well as carrying flares and being armed with a rifle on his side.”

The day before Spronsen’s attack on the ICE Tacoma Detention Center, Spronsen left behind a manifesto and had sent letters to a handful of his friends “just saying goodbye”. Deb Bartley, a friend of Spronsen’s for over 20 years, believes his attack on the detention center was intended to provoke a fatal conflict. In Bartley’s statement, she claimed,”He was ready to end it. I think this was a suicide. But then he was able to kind of do it in a way that spoke to his political beliefs. I know he went down there knowing he was going to do.”

Shawn Fallah, who leads the ICE Office of Professional Responsibility, told The Washington Post, “This could have resulted in the mass murder of staff and detainees housed at the facility has he been successful at setting the tank ablaze. These are the kinds of incidents that keep you up at night.”

These are a few pages from #WillemVanSpronsen's goodbye letter. He wrote this before attacking the ICE facility. Some are calling a "manifesto". pic.twitter.com/9kofi2yqPK

The manifesto also used verbiage from the stepfather of Michael Brown, who demanded that the Black Lives Matter group “burn the motherf**ker down!” - referencing the city of Ferguson, Missouri, after Officer Wilson was exonorated.

The Tacoma bomber's manifesto has been published on the main Antifa website, itsgoingdown. It echoes the extreme rhetoric of AOC and her squad, replete with "concentration camps," "Beckies" and more.... https://t.co/lDQOn87hg1 The literal influence of DC progressives is apparent. https://t.co/1y4MUcSdHO

Seattle Antifascist Action called the Spronsen “a good friend” who “gave his life to the struggle against fascism.”

“Willem Van Spronsen just became the first martyr attempting to liberate imprisoned refugees from a for-profit detention center in Tacoma, Washington. His hero was John Brown -the white abolitionist who led the raid on harpers Ferry in 1859. This is what our country has come to.” — Shaun King (@shaunking) July 15, 2019 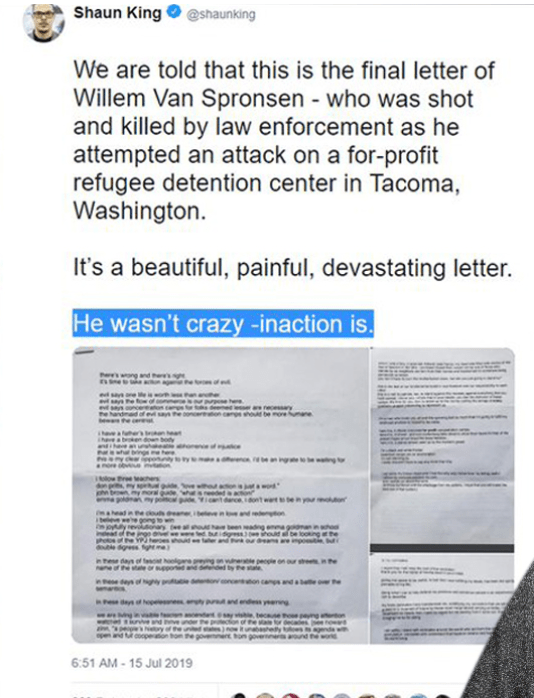